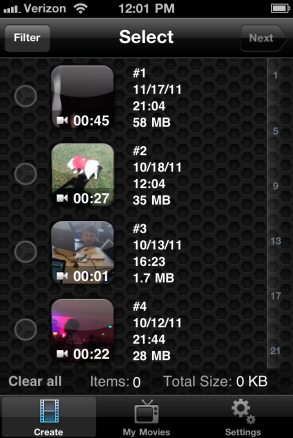 Cameras are getting better on the iPhone, with the iPhone 4S sporting an 8 megapixel camera with 1080p high-definition quality video. People already carry their phones around to use in lieu of a camera, and the App Store is filled with photo-editing applications such as Instagram and Hipstamatic. Their charm comes from the easy, no-edit-photo-editing” that turns so many plain shots into hipster sepia-tone masterpieces. Similarly, HighlightCam is a no-edit-editing way to make great mini-movies out of those quick videos you’ve captured with your iPhone and never knew what to do with.

HighlightCam is a Y Combinator alum, which uses face recognition and video editing software to create mini-movies. First, you choose the videos you would like to mash up, and can preview them before selecting. After you’ve chosen your videos you select a name, and whether you want the software to focus on people, audio, action or a balance of the three. Depending on the size of your video, it can take a little while to create the work. Mine only took about two minutes. Movie credits are your form of currency, and you start out with 10. You can purchase more depending on how many videos you’d like to make.

HighlightCam officially launched in February 2011, was founded in 2009 and graduated from Y Combinator that year. The company started as a type of surveillance camera, “highlighting” when changes in audio and movement occurred in a video. Founder Michael J.T. O’Kelly thought up the idea when his wife wanted to see what her rabbits were up to when she was out of the house.

It seems Y Combinator has been its only funding thus far, other than this new investment from Quest Venture Partners, with no other Form D’s filed. The venture firm colors itself an early stage investor with “the first money in” according to its website.

We have contacted the company for comment and will update the story upon hearing back.