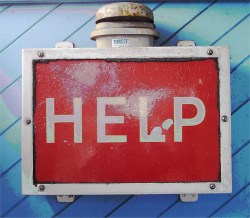 Congratulations, you’ve just made a new network connection on LinkedIn. Now what?

Sure, you can celebrate the expansion of your professional network with a little fist-pump, but are you really getting anything out of that connection? Favo.rs launches Wednesday to help ensure that you build more lasting relationships from your new business contacts.

The site can be likened to a marketplace for networking, where users barter for professional favors in exchange for status, points and the satisfaction of knowing that they’ve helped someone out.

“What we’re really trying to do is to provide people with an opportunity to discover new people that they want to network with professionally, and then give them reasons to connect with each other and build those relationships,” co-founder Adam Rodnitzky told VentureBeat.

Favo.rs users can pose general requests, ask for introductions and advice, or query their network for feedback. The service will reward each action with points, track favors and chart the evolution of relationships over time. People can, of course, link their accounts to Facebook, Twitter and LinkedIn, and also follow each others’ good deeds. The service is also fully functional inside of Facebook as an application.

The I’ll-scratch-your-back-if-you-scratch-mine product for professionals first launched in private beta six months ago and currently has 1,200 users. Users have posted around 450 requests in total during that time, and 93% of all requests have been granted, Rodnitzky said. 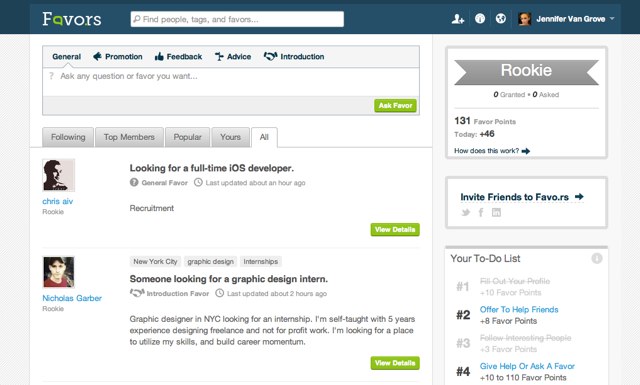 Favo.rs has a bit of an odd backstory. The service is a product of ReTel, a 2009 TechStars Boulder startup that raised more than $1 million and created an in-store analysis service for retailers and restaurants. That product now runs itself and financially supports the company, and nine months ago the team decided it was ready to try something else.

“It didn’t evolve into the type of business that we or our investors wanted,” Rodnitzky said of RelTel. Favo.rs is not a pivot, he said, and instead ReTel will run the two businesses side-by-side.

Rodnitzky even spoke of wanting Favo.rs to become the next great social network, but it’s hard to see this ask-a-favor service as offering anything more than a nice-to-have feature. And so I wondered (aloud) whether the company was simply trying to build an attractive pump-and-dump acquisition target for LinkedIn, a newly public company that may be looking to fill a few gaps. Not so, Rodnitzky insisted.

“We developed this to solve a problem that we had, and we didn’t develop it with the intention of having a quick exit,” he said. “We want this to be something that is someday seen as another success story — like Twitter.”

Should the site wish to rise up the social networking ranks as Rodnitzky envisions, the company will need to better differentiate itself from LinkedIn, Hashable, Sumazi and other similarly-purposed sites, solve the user on-boarding experience, which leaves first-timers a little lost as to how and where to start, and further drive home the value of participation.