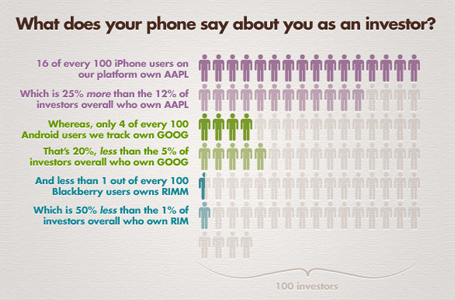 You may love your phone, but do you love it enough to invest in the company that makes it? Well, if you own an iPhone you are more likely to also own Apple stock, a recent survey reveals.

SigFig, an investment tracking and advice website, conducted a survey of its 300,000 members to find out how loyal mobile customers are to the brand behind their phone. The results show that 16 percent of iPhone owners also own stock in Apple, compared to  just over 12 percent of all SigFig members. In addition, only eight percent of Android owners and six percent of BlackBerry owners have stock in Apple.

Apple by far has the highest loyalty of smartphone owners among the survey respondents, a trend not seen with those who use Android or Blackberry phones. Only four percent of Android owners have stock in Google, and even fewer — less than one percent — own stock in Motorola. Loyalty to Android is harder to show because you can either own stock in the company that makes the software (Google) or one of the many the manufacturers of Android hardware (Motorola, LG, Samsung, etc). Still, far more smartphone users are investing in Apple than Google.

Blackberry fairs the worst; less than one in 100 Blackberry owners have stock in RIM. That’s right, even people who willingly own and use Blackberrys won’t invest in RIM.

So, are you loyal enough to your phone to buy stock the company that makes it?