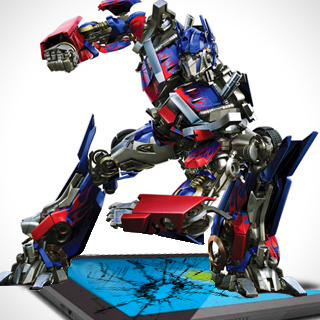 It looks like we weren’t the only ones who heard about Asus’ Tranformer Prime tablet and thought of Optimus Prime and the Autobots.

Toy maker Hasbro is taking gadget maker Asus to court for trademark violation. As far as Hasbro is concerned, Asus’ preferred nomenclature comes too close for comfort to the company’s toy and entertainment franchise — especially its trademark-pending 2010 series, Transformers Prime.

Altogether, Hasbro is claiming the infringement of five trademarks in this suit.

“The specific actions we are taking today against Asus underscores yet again Hasbro’s willingness to pursue companies who misappropriate our intellectual property for their own financial gain. The Transformers property is an incredibly popular global brand which enjoys tremendous fan support and interest around the world.”

The highly anticipated Asus tablet is a 10.1-inch unit running Android 4.0, a.k.a. Ice Cream Sandwich. It’s a third of an inch thick, weighs around 1.3 pounds and comes with a mobile dock featuring a full-size QWERTY keyboard and touchpad, hence the “Transformer” nomenclature.

Because the Tranformer Prime (or whatever it’s going to be called once the legal dust settles) is powered by Nvidia’s Tegra 3, the first-ever quad-core processor for mobile devices, Asus and Nvidia are telling consumers the tablet will deliver lightning-fast apps, gorgeous video, responsive gaming and an extra-long battery life — up to 18 hours, in fact. The tablet also features an 8MP rear-facing camera and a 1.2MP front-facing camera.

Here’s a demo showing the gadget in action:

For most adults in their tablet-buying years, it’s almost impossible to hear the name “Transformer Prime” and not immediately think of Transformers — the toys, the cartoons, the live-action movies, the comic books, etc. And if your childhood (and young adulthood) was anything like mine, it’s impossible not to think about Transformers and be filled with a subtle and inexplicable feeling of giddiness.

Asus might have been making a clever allusion to a pop culture (and nerd culture) icon, but it’s also cashing in on something Hasbro has worked for decades to build: positive brand associations on a subliminal level.

We’ve contacted Hasbro for more specific information on the lawsuit and hoped-for outcomes and will update you as more information becomes available.