This was a groundbreaking holiday season for e-commerce. Cyber Monday lived up to its hype – the biggest ever – and online sales held strong throughout the season. While sales figures took the majority of the headlines, this season gave birth to a new trend: “couch commerce” — people using tablets as their preferred device for shopping.

My team at Compuware measured 2011 holiday site performance, and we found that the volume of consumer traffic generated by iPads dwarfed that of iPhones for major retailer websites in the weeks leading up to the big Cyber Monday push. This confirms earlier Forrester data from analyst Sucharita Mulpuru, which noted that retailers surveyed say 21 percent of their mobile traffic now comes from tablets, with several companies anecdotally reporting figures above 50 percent. 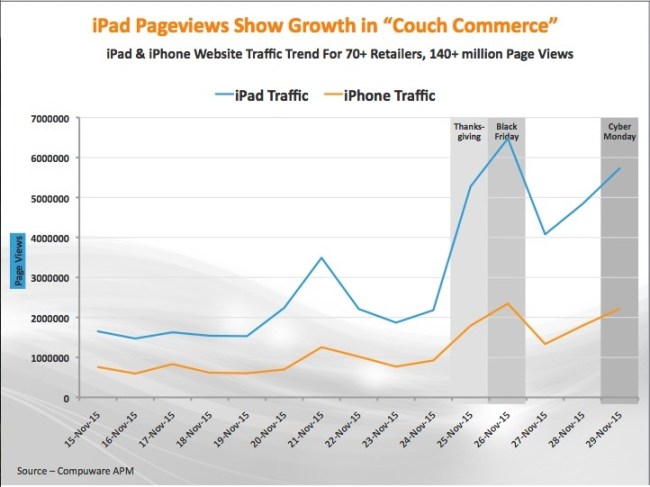 The tablet is ergonomically a great device with which to casually shop while seated. Our data revealed that people started using their iPads to shop within hours after Thanksgiving dinner. The tablet is clearly adding to the growth in online retailing, but there’s a catch.

While consumers enjoy shopping with their tablets, retailers now have another device requiring optimization. Why is device optimization (a website version built for a device’s specific characteristics) so important? The short answer: non-optimized sites can diminish or even ruin the user experience, which equates to less traffic and fewer sales.

So were retailers fully prepared for couch commerce in 2011? Not really. We analyzed 30 U.S. retailer sites and found that none of the sites were optimized for the iPad, and only 14 had a dedicated iPad app. While some may argue device-specific optimization isn’t critical, sites that are slow and don’t meet end-users’ performance expectations result in lost customers and revenue.

The lack of Flash capability in iPads has been well publicized, but many retailers still have Flash-based content. Tablets also have less CPU power and RAM than their desktop or laptop counterparts. Combine these with the inconsistencies of mobile carrier connections, and you have an entirely different environment for optimizing your website.

The navigation differences between a mouse and your finger are also significant. Unless a site is touch-enabled, some links requiring a mouse click may not work. Many times this won’t be a problem but can be frustrating for users when it does occur, especially when shopping cart links don’t execute properly.

When a site is tablet-optimized, the quality of the user experience amplifies the device’s glide-across-the-screen elegance. If not optimized, it can be cumbersome and make the user want for a “real browser.” For example, tapping a single, small text link on a web page designed for a large monitor can get tedious. The graphics below show how eBay’s full site appears on an iPad compared to its new tablet-optimized site.] 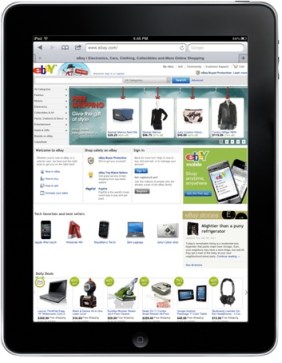 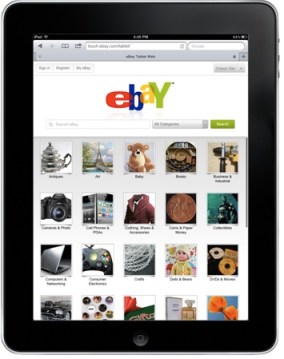 There can also be page load time slowdowns if a page’s composition isn’t attuned to the device. Shoppers will abandon slow-loading or buggy sites within seconds. As Robert Hamilton from the Google Mobile team said about the link between increased usage and a fast user experience: “(This) reinforces something we at Google have known for a long time: fast is better than slow.”

Just five years ago retailers only needed to deliver a stable, fast-performing website for a single user experience (Internet Explorer on the PC). Today, tablets must now be added to the growing list of mobile devices mandating optimization. This includes multiple smartphone OSs and dedicated apps for a variety of platforms. That’s a lot of complexity, but the investment will be worth it.

According to Forrester Research, tablets already account for 20 percent of e-commerce sales, despite the fact that only 9 percent of shoppers own tablets. Given the holiday 2011 growth in couch commerce, expect IT departments to expand their tablet-specific budgets beyond their current levels and in 2012 begin to mirror what happened after the smartphone took off: more sites optimized for the device and more dedicated apps created to directly match stores to a device, resulting in happier shoppers, and most importantly, more revenue.

Steve Tack is the Chief Technology Officer of APM Solutions for Compuware Corp.