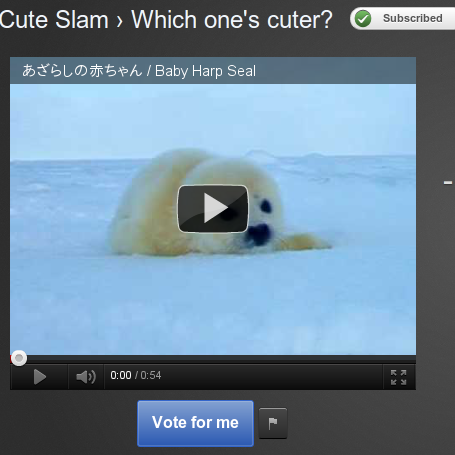 Google is attempting to remedy the dispute between which viral videos are the most entertaining with a new experiment called YouTube Slam.

According to the YouTube official blog, YouTube Slam is a video discovery experiment it created in partnership with Google Research. Every week the staff will pick a new crop of videos in several categories (including Comedy, Cute, Music, Bizarre and Dance) that users can vote on. The winning videos get featured on a leaderboard.

The new service allows you to earn points for predicting the Slam winners, and gives you the ability to see how you stack up against other players each week. It’s an interesting development since we don’t typically see these kinds of simple gaming mechanics used to motivate people into using a new Google service.

On the surface, YouTube Slam looks like a fun way to aimlessly waste some time during the day. However, it’s actually helping Google and YouTube create more value among its user-generated videos, not to mention boost subscriber numbers for active YouTube channels. As we previously reported, YouTube is trying to focus its energies on original channels. This new feature is an extension of that. Should the “slam” voting feature roll out to other popular channels, it may boost user interaction.