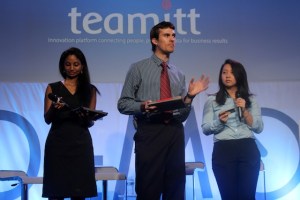 There’s money in the cloud, and some college students are already wise to the opportunity.

Three early-stage, student-led startups and one more-established startup hit the stage at the first-ever DEMO: Enterprise Disruption event this evening to show off their best efforts at reinventing the enterprise.

Teamitt describes what it does as combining people, processes and data to produce more effective results. It’s a sort of dashboard for enterprise resource planning that can give managers better insights into correlations between training and results. Think of it as a kind of Facebook for your company, letting you find employees by expertise, give them invitations to training,

The founders are students from Stanford and UC Berkeley, so Teamitt is already bridging one big cultural communications barrier: that between Cardinal fans and Bears fans. 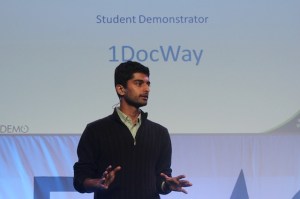 1DocWay is a site that helps doctors and patients connect with one another for online face-to-face interviews. If your hospital or doctor’s office has 1DocWay, you can log in, view your favorite doctor’s schedule, and request an appointment. It can then take you to a secure, HIPAA-compliant chat room to chat with your physician via a browser-based video chat. Video sessions then get logged so doctors and patients can look them up again and review notes.

“A project like 1DocWay is going to live or die less on technology and more on understanding the adoption dynamics in their industry,” said Peter Wagner of Alpha Venturi, another investor, in response to the pitch. “It looked like the team had a pretty good handle on that.”

To start out, 1DocWay is focusing on behavioral health (psychiatry). The company already has a customer (a hospital) and is looking for its seed round of funding. The founders are Wharton business students. 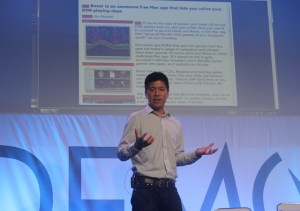 Diffbot is a tool that parses data from web pages to extract relevant data, automatically generating metadata such as an article’s title, author, body text and tags. Using the tool, developers can more easily construct applications that make use of data from the web. During the company’s onstage demonstration, the founder wrote a snippet of JavaScript code on the fly to select all the URLs on Hacker News, pass them through Diffbot, and then load the results. The resulting code instantly reformatted the page to show summaries, tags, and display previews of web pages.

Diffbot’s demo was impressive, and Wagner thought that Diffbot had potential for developers building web applications. Baskett expressed some skepticism based on the short demo, however: “I was worried about their targeting,” said Baskett. “Software developers have some characteristics we all know about. One, there aren’t enough of them and two, they don’t spend much money.”

Stanford University provided Diffbot’s initial funding, and it was the first company to be selected for the Stanford incubator, StartX.

Sococo is a kind of virtual office building for collaborating with your co-workers. It represents each person on the system as a little round head, and you can move from virtual room to virtual room to chat with different groups of people. In Sococo’s “conference rooms” you can also use real-time audio conferencing and document sharing to work on projects together. Also, as of today, the company is adding videoconferencing to its features.

“The whole category of cloud-based communications is a rich one,” said Wagner. He was cautiously optimistic about the company, but suggested that it might need to focus.

“[Sococo is] biting off a lot, though. It’s a great category, but there’s a fair amount of clutter,” Wagner said.

One thing Sococo has going for it: a cute interface that is a bit like Turntable.fm meets the Sims, with little “pop” sounds whenever someone pops into your space.

Speaking more generally, Baskett was bearish on the whole category of cloud services.

“I think that cloud services has only started to develop into what it can be down the road,” said Baskett. “I think the cloud is going to change [a lot], in fundamental ways that we’ve only scratched the surface of.”