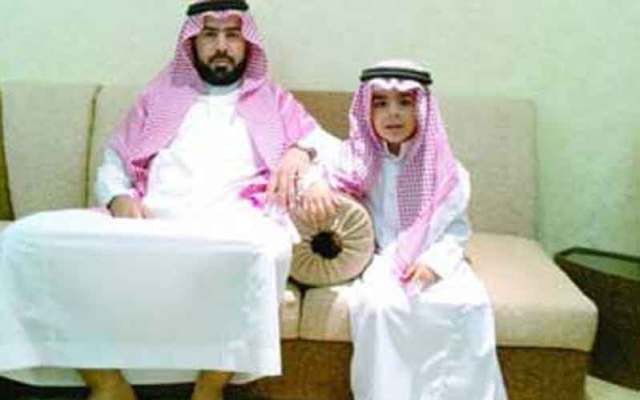 Today, we are reading reports that a Saudi Arabian man is attempting to sell his own son on Facebook. His asking price is 73 million UAE Dirhams, or around $20 million.

The man in question, Saud bin Nasser Al Shahry (pictured above with son), saw his illegal debt-collection business shut down by a local court. He told a Quatari news outlet Al Sharq that the human trafficking was his only option to avoid “living in poverty” along with his wife and daughter.

Al Shahry stated that he would go to the courts if necessary to complete the sale and that, in addition to the $20 million, all he wanted to know about the buyer of his child is the city in which the buyer is located.

Saudi Arabia has been designated by the U.S. Department of State as a Tier 3 country with regard to human trafficking. In other words, the country doesn’t comply with minimum international standards on human trafficking, nor is it making any real effort to do so.

Although slavery was officially abolished in Saudi Arabia 1962, human trafficking in this area has only gotten worse since the State Department began monitoring it, causing the country to drop from a Tier 2 region to Tier 3 during the reporting period.

In recent reports, the State Department clarifies, “The government continues to lack adequate anti-trafficking laws, and, despite evidence of widespread trafficking abuses, did not report any criminal prosecutions, convictions or prison sentences for trafficking crimes committed against foreign domestic workers.”

While the Saudi government may turn a blind eye to activity like this, the very idea of selling children, online or anywhere, is repugnant to global audiences. We’re working to find out whether or not Al Shahry has the right to conduct this type of activity on Facebook and will update this report soon.

Specifically, in addition to a simple from-the-horse’s-mouth verification of the facts we’ve laid out above, we’re asking Facebook whether this type of sale is legally allowed on the network (which has historically leaned toward free speech, even in dicey circumstances) and what Facebook plans to do about this troubling situation.

A representative of the Electronic Frontier Foundation, which supports (sometimes controversial) free speech on the web, writes to VentureBeat, “I don’t know that anyone has the right to sell his child, whether on or off Facebook… The fact that it’s a social network makes no difference.”

According to Facebook’s Statement of Rights and Responsibilities, posts and accounts may be deleted for certain human rights and safety, stating in the third section, “You will not post content or take any action on Facebook that infringes or violates someone else’s rights or otherwise violates the law.”

In general, the National Society for Human Rights, a Saudi Arabian human rights group closely associated with the Saudi government, reports that around half of all Saudi children face domestic violence or some kind of abuse. Activists in the country claim that 20 percent of the population lives in poverty and that 70 percent of Saudis do not own their homes.