Been waiting for those extras like screen sharing in Google+ Hangouts? Wait no more. The company is rolling out its first extra to the masses and increasing the video player size while they’re at it.

The company introduced “extras” in September, which included a sketchpad for doodling, integration with Google docs for simultaneous editing, the ability to name a hangout, as well as screen sharing. This last feature is the first of these to be rolled out for all Google+ users. It’s an important feature that sets Google’s free Hangout service apart from other business-focused video meeting software. Why? Well, it’s great for showing a team what you’re working on without sending the unfinished document out to everyone. It’s also a part of a free service, which many small businesses can appreciate.

“When we launched Hangouts with Extras last September, we wanted to test new features and get feedback from users. We’ve learned a lot over the past few months, and today we’re rolling out a new Hangouts look and feel that incorporates some of the “extras,” and better reflects Google’s overall design,” the company said in a Google+ post. 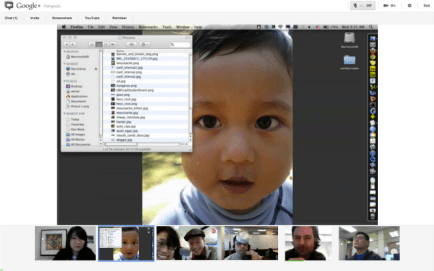 We’ve said in the past that these extras are what will make Google+ not just a social network, but a business and personal collaboration tool.

Google has also recently undergone a visual strategy change, starting with its search homepage in June. The goal of this strategy was to bring focus, elasticity and effortlessness to its products. That is, deliver on what the person is looking for, be developed to work across multiple devices and be simple to use. Hangouts is getting a bit of this flavor with a new screen size.

The white space was too underused for Google, so the new screen will take up most of this. Also, other interaction tools such as chat, invites, YouTube and more have been made more discreet.