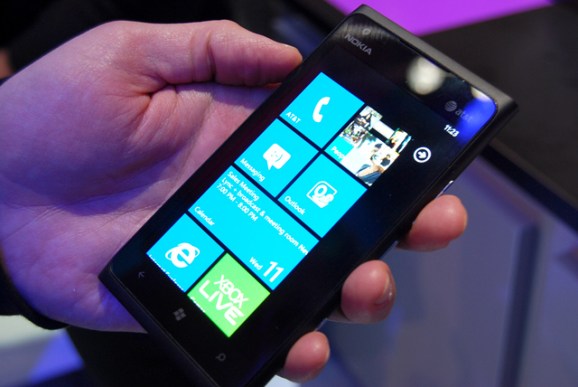 Nokia announced the anticipated Lumia 900 smartphone earlier this week at the Consumer Electronics Show, and we decided to spend some well-needed hands-on time with the device.

Simply put, the Nokia Lumia 900 may be the single best phone Nokia has produced in years. It features a beautiful 4.3-inch AMOLED Clear Black display that makes Microsoft’s Windows Phone operating system pop. For specs, it has a single-core 1.4-GHz processor, an 8-megapixel camera with an LED flash and a front-facing camera for video conferencing. (Read more about the Lumia 900’s specs in our product database.) While it’s disappointing that the processor is only single-core, Windows Phone’s lightweight OS makes it very responsive.

While I was a fan of some early smartphones from Nokia, the Symbian OS looked clunky and way outdated compared to iOS and Android of recent years. The Finnish company certainly knows how to make sexy hardware — it was just software that it struggled with. The Windows Phone operating system, while not exactly popular, is a staggering improvement, and that counts for all three officially-announced Nokia phones with the Windows Phone OS.

The Lumia 900, if you’ve been paying attention, is like the big brother to the previously announced Lumia 800. The 900 has a larger screen than the 800’s 3.7-inch display, and adds a front-facing camera. It also blows away the less-expensive budget model, the Lumia 710, which has only a 5-megapixel camera.

I really like the feel of the Nokia 900, more so than the 800 and the cheaper 710 model, mostly because of the screen size. The 4.3-inch screen makes a lot of sense with Windows Phone’s Mango OS. Flicks between screens are fast, fluid and responsive. I also like the first two color choices for the 900, black and cyan.

While the phone has no official price or release date, a Nokia representative said the device would be out in the “spring” on AT&T exclusively. If we had to take an educated guess, the Lumia 900 will likely run $199 with a 2-year contract.

Check out more photos of the Nokia Lumia 900 here: