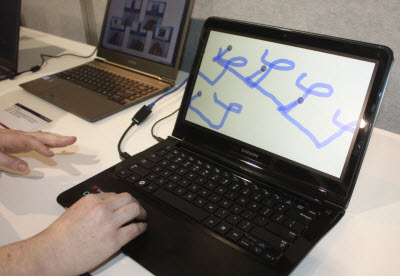 Synaptics showed off how touch controls will change in the next year at the recent Consumer Electronics Show. Synaptics has a big market share in touch application hardware and it showed off its latest products at the show.

In the picture at right, you can see that upcoming touchpads for laptops will be able to handle the simultaneous input from more than just two fingers. The image at the right shows how you can use five fingers on a touchpad at the same time. This enables apps like multi-finger painting or more complex gesture commands using your fingers. You can scroll with two fingers or flick an image from one part of the screen to another with four fingers. 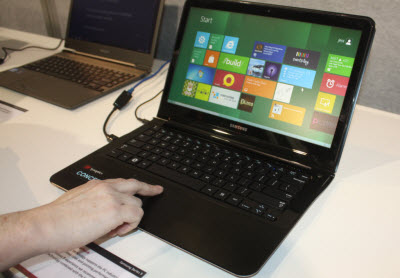 With Ultrabooks, which are thin laptops akin to Apple’s MacBook Air, another wave of change is coming. With more than 70 models on the way, the Ultrabooks will use touch both in the touchpad for the cursor control as well as a touchscreen. The touchpads for the Ultrabooks could become much larger than is typical, particularly with Windows 8 coming out later in the year. You can use one or two fingers to move the Metro user interface (pictured left) with lots of block-oriented buttons you can click on.

Synaptics has technologies that it calls a TouchPad, or a touch-sensitive surface such as a laptop touchpad; a ClickPad, which can be used for scrolling and pointing just like a TouchPad but can also be used to replace physical buttons; a ClearPad, a touchscreen solution; and InterTouch, for multi-finger and multi-gesture support on touchpads, used in combination with TouchPads or ClickPads.

Right now, ClickPads are shipping in Ultrabooks such as the Lenovo U300s, HP Folio 13, and the Acer Aspire S3. The InterTouch uses a faster connection within the computer to transfer more data at the same time. That’s why it allows for multiple-finger touches at the same time. It’s very responsive. In the touch painting, you can see little halos on the screen so you can see where your fingers are.

With Microsoft’s Windows 8 operating system, Microsoft wants computer makers to use larger touchpads. Synaptics is recommending that computer makers use a large image-sensing ClickPad with a high-speed connection to get an optimal result. Synaptics is working as an engineering partner with Microsoft so that it can enable computer makers to design the bigger touchpads (at least 4.9-inch diagonal) into the limited space in the thinner laptops. The experience is intended to be the same as working with a smaller touchpad, so users don’t get confused when they move to Windows 8. 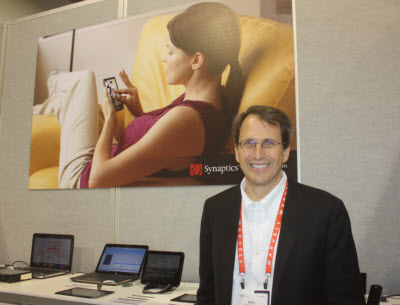 “It means the days of the little touchstick are long gone,” said Rick Bergman (pictured right), chief executive of Synaptics, in an interview. “We’re absolutely in a very cool space.”

Intel believes that Ultrabooks will have touchscreens, though some people believe that’s not going to work so well. Synaptics is covered on both options, as it has touchscreen and touchpad technologies, Bergman said. Definitely, though, some machines will have both. Convertible laptops, for instance, will be used with touchpads when they are in a regular laptop mode. But they can be used as touchscreens when you twist the screen around and use them as tablets.

Some of the desktop computers are also have built-in touchpads so that you don’t have to attach a mouse to the computer. 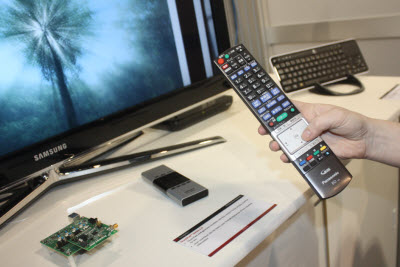 Touch controls are also spreading throughout the digital home. TVs, set-top boxes, and internet-enabled media centers or Blu-ray players will likely make navigation more complicated as they take on more functions. To deal with that, companies such as Panasonic are creating remote controls with built-in touch surfaces (pictured left). With button-based remotes, it’s harder to surf through a bunch of media selections. But as the second video below shows, it’s much easier to use a small touchpad embedded within a remote to move a cursor across a screen.

Philips has a dual remote where you can use buttons or a touchpad. It is shipping with Iomega TVs in Europe. Synaptics also has screens that can respond to both touch and pen input.

Here are two videos where Jacqui from Synaptics shows us the variety of touch-oriented technologies that the company is working on touch concepts for the coming year.