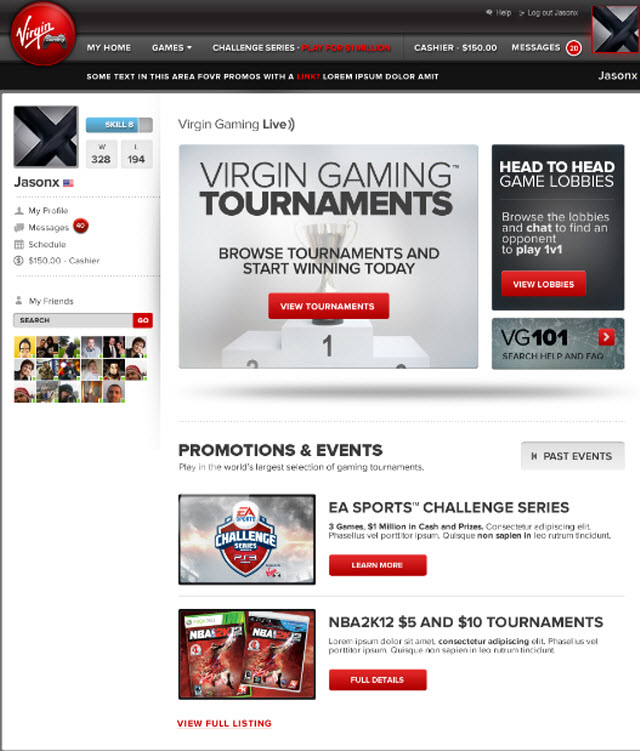 Virgin Gaming, the online tournament gaming division of Richard Branson’s Virgin Group, is announcing today that it has snagged more than a million registered users for its prize-based online gaming tournaments.

Virgin has awarded more than $7 million in cash prizes. Four million game challenges have been issued and players are spending an average of 72 minutes per visit to VirginGaming.com as they play hardcore console games such as Electronic Arts Madden NFL 12 or Take-Two Interactive’s NBA 2K12.

“The numbers are increasing on a daily basis,” said Billy Levy, co-founder of Virgin Gaming and president of the group. “More than 700,000 of those players have signed on in the last four months.”

More and more publishers are adding new options for tournament play through the Virgin Gaming site. Besides EA’s EA Sports and Take-Two’s 2K Sports, other partners include Sony PlayStation, Ubisoft and GameStop. 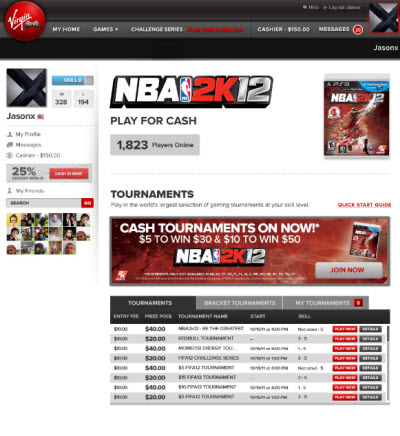 “We knew we were on to something and that our service had significant potential, we just didn’t realize it would take off as quickly as it did,” said Rob Segal, chief executive of Virgin Gaming.  “Our team continues to evolve the experience on a daily basis, and user feedback has been a key component in our upgrades.”

Virgin Gaming’s tournament play is integrated directly inside the games. The service can match similarly ranked players in tournaments. It can report the results of matches, categorize players into rankings, process secure payments, and provide customer support. Players can compete for online cash, knowing that cheaters will be rooted out of the system, since Virgin offers a “fair play guarantee” with automated game results validation.

Virgin started the service in June 2010. But Levy said the team worked out the kinks for a period of time and the biggest games have really ramped up in more recent times.

Virgin Gaming is now running the Challenge Series tournament on the PlayStation 3, where players are competing in Madden NFL 12, NHL 12, and FIFA 12 for a chance to win over $1 million in cash and prizes in a single tournament. That’s the largest prize money ever for a console-based sports tournament. That tournament will end in April with live finals in New York.

When that happens, Virgin Gaming will begin to compete with Major League Gaming, which sponsors both online and live tournaments around the country. The tournaments can involve players of all skill levels, not just professional gamers. GameStop is also involved in a $100,000 Gridiron tournament with 30,000 players.

“That shows our system can really scale up to large tournaments,” Levy said.

What really helped the tournaments take off was the introduction of “asynchronous play.” In previous tournaments, players had to start playing at 7 pm at night and keep playing all night until they lost.” But now, you can play a game at a time of your own choosing, as long as you can find another player of your same rank at that time. That gives players more flexibility about when they have to play in the tournament.

Levy said that the tournaments are starting with online gaming but could be expanded to mobile and social games, where the company would compete with King.com, Worldwinner and GameDuell.

Levy started the company with his buddy Zachary Zeldin in 2007 during their days at a university in Florida. They followed some of the live tournaments but found those games were dominated by superstars. There wasn’t really a tournament gaming business for ordinary gamers. So they started one and teamed up with Segal, who ultimately introduced them to billionaire Richard Branson.

Branson was actually an early pioneer in video games. His company formed Virgin Games in 1981. The company made acquisitions and steadily expanded its operations, renaming itself  Virgin Interactive in 1994. It fostered some great talent such as David Perry, Louis Castle, and Brett Sperry. Sperry and Castle’s Westwood Studios made memorable games such as the real-time strategy games Dune II and Command & Conquer. But Virgin also made some major duds, such as the movie-based game Demolition Man. In 1998, Virgin sold the game company’s U.S. assets to Electronic Arts, while it unloaded the British game studios in a management buyout.

If Virgin Gaming keeps growing, then Branson will be happy he got back into gaming.