New York-based startup MightyMeeting has its sights on boosting mobile productivity in the enterprise. In keeping with the growing trend of using tablets to do work, MightyMeeting is unveiling a collaboration app called MightyTeams for the iPad and Android tablets.

Several apps have popped up in the last year that have pushed the enterprise into adopting tablets. Apps such as Skype, Dropbox, Yammer, and SalesForce Mobile have paved the way for more enterprise-minded apps to be released. 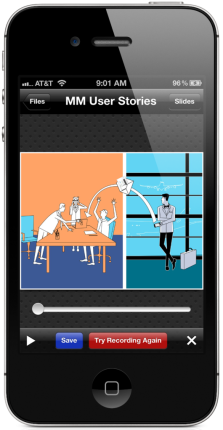 MightyMeetings seeks to eliminate the need for multiple apps to communicate with your team and share work with its new application MightyTeams. While popular services DropBox, Skype, and Google Docs give companies an easy way to share documents, collaborate on projects, and communicate with entire teams, you still need at least 2-3 apps on your tablet to use these services. MightyTeams rolls several collaboration services into one app, letting you share files, work on documents between teams, message team members, and hold conference calls in one interface.

MightyMeetings previously released an app of the same name which focused on presentations via video and PowerPoint and attracted customers from the pharmaceutical, manufacturing, and financial services industries. The new application, available online and for iOS and Android devices, focuses on collaboration between employees includes features such as microblogging, group messaging, voice conferencing, and file sharing. Each service is something you’d find in a stand-alone app. For example, Yammer is a enterprise social network that includes activity streaming and microblogging, and Skype offers group messaging and video calls.

“Unlike Dropbox we transcode content – videos and presentations – for the iPad, iPhone, and Android. This content can then be presented directly from the iPad, locally or remotely,” MightyMeetings chief executive Dmitri Tcherevi told VentureBeat in an email, “No one else does it as well as we do, and this has been driving adoption. We now have over a million assets in our repository.”

MightyMeetings isn’t the only company to release an app like this. Veeva Systems has released similar software-as-a-service applications to enable companies to work on projects together. Veeva’s Vault service, for example, facilitates file sharing and project cooperation. Veeva’s products are primarily aimed at the pharmaceutical sales industry.

MightyTeams will be available Tuesday, Feb. 21 in the Apple App Store and the Android Market. It can also be accessed with any browser. The app will cost you a subscription fee of $4.99 per month, but current MightyMeetings members can get it for free.