For geeks, small head-mounted cameras streaming to iPhones seem like cool, sci-fi inspired gadgetry. For cops, they may be the best way to record incidents, avoid lawsuits, and stay one step ahead of disastrous PR and public outrage. 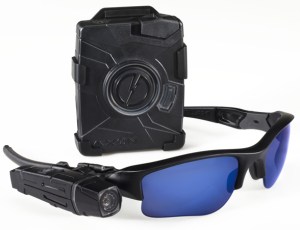 Above: The Axon Flex camera on a pair of Oakley sunglasses.

On Tuesday, police-tech company Taser, maker of the eponymous electroshock guns, announced its latest on-officer camera system for law enforcement. The cameras mount on Oakley sunglasses and have companion Android and iOS mobile apps. The first people to get the new technology are none other than the 150 patrol officers on the troubled Bay Area Rapid Transit (BART) force.

On-dashboard car cameras were considered advanced when they first came out. But the technology has evolved and shrunk over the years, and while law enforcement isn’t known for being ahead of the technological curve (the San Francisco Police Department still takes statements on carbon paper), Taser thinks the time for on-officer cameras and digital video has arrived.

The new wearable-camera system, Axon Flex, is Taser’s second try at wearable cameras and will work with the company’s companion cloud storage system for managing the resulting videos, Evidence.com.

The people at Taser are fast learners. After rolling out its first foray into the wearable-camera market just last year (an earlier on-Taser camera didn’t take off), the 19-year-old company quickly realized drastic changes were needed to how it was designing and producing the still-new gear.

“Everyone we talk to gets it, that we want the camera on the officer,” Taser CEO Patrick Smith told VentureBeat. “People can see it coming, and we think we’re at the inflection point right now.” 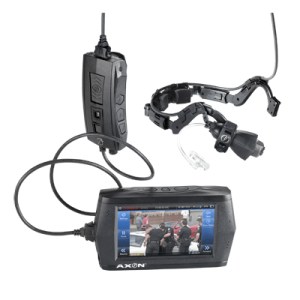 The first iteration, called the Taser Axon, was bulky, uncomfortable, a bit dorky looking, and made almost entirely by Taser. To a generation of iPhone users, the large handheld viewer immediately jumped out as unnecessary and dated. “It was too clunky, too early,” said Smith.

The company went back to the drawing board and decided to focus on only the things it did best, and to outsource the rest to partners that were already the best in their fields. (Smith said the book “Good to Great” by Tim Collins was his inspiration.)

First there was the cool factor. “Our headgear was slightly more comfortable than braces,” admitted Smith. Officers were unhappy with the way Taser’s custom head-mount looked and felt, so Taser surveyed various members of law-enforcement to find out what brands they really wanted. Ninety percent of officers said they liked sunglasses-maker Oakley. The new system Flex camera mounts via magnet directly onto a custom pair of Oakley Flack Jacket glasses.

For the camera, Taser went to a company called Looxcie that was already making compact, wearable cameras with Bluetooth streaming technology. A few custom modifications were made, including maximizing the cameras for low-light shooting. The cameras shoot 30 frames per second of video at 640-by-480 resolution.

The hulking custom viewer is out, and instead the company has created mobile apps for Android and iOS smartphones and tablets. The video files are stored on the camera itself (up to 8GB) and can only be downloaded using a special mount at the station for chain-of-custody reason. However, the officer can use the Flex Mobile app preview, name, and add notes to the video on any compatible mobile device. The app can also show the camera’s battery and memory status, and Smith says GPS is coming soon.

Taser is working on another Android and iOS mobile app, called Evidence Mobile, that collects digital evidence from a crime scene, including photos, audio notes, and GPS tags.

Cloud storage for the Evidence.com system is now run by Amazon Web Services. Evidence.com is Taser’s ambitious online management solution for all the videos police record. Unlike the DVDs or VHS tapes many precincts still use, digital video stored on a remote server is available to multiple people at any given time.

In the beginning, Taser tried building its own web servers for Evidence.com, but Amazon had already jumped through the hoops and invested time and money to make its service FISA (Foreign Intelligence Surveillance Act) compliant. The act outlines tricky government-required procedures for handling electronic surveillance.

Finally, Taser adjusted how it priced and sold the system. Each camera system comes out to about $1000 per officer, but a set pricing structure turned out to a hard sell. Some agencies have an annual budget, others just a one-time chunk of money. Some want to lease equipment, other need to buy it outright. Taser is giving its sales force the flexibility to work with each agency and nail down whatever unique payment structure works for them.

The drastic change in direction was something Taser was lucky enough to be able to fund. The public company has taken all of its profits from the last three years and sunk it into the on-officer camera technology and the Evidence.com digital-asset management system. Though almost two decades old, the company has some fresh, startup blood on its board helping it navigate the new, rapidly changing gadget-waters; Hadi Partovi, former Facebook and Dropbox advisor is a board member.

A history of violence 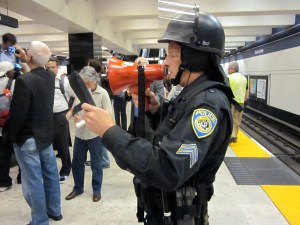 Above: A BART police officer declaring a protest unlawful.

BART officers will start using the new Flex camera systems at the end of the month. The transit system’s police force has had several unfortunate run-ins in recent years. Officers fatally shot the unarmed Oscar Grant in 2009, an event that was thoroughly documented by nearby passengers with camera-phones. In 2011, BART officers shot a man named Charles Hill, whom officers say was armed with a knife.

Both incidents resulted in public outcry and protests, but the Hill drama took an unexpected turn when BART shut down cell phone service along the train lines to prevent protesters from coordinating locations. Impinging on riders’ civil liberties did what a mere shooting and death couldn’t: it led to much larger protests, international condemnation, and the involvement of Hacker-activist group Anonymous.

If police had captured the Hill shooting on video, and if what the video showed exonerated the two officers, would the incident have still snowballed into a public relations nightmare? If the incident wasn’t on the up-and-up, would the officers have even turned on their cameras?

Cynics, loopholes, and the psychology of being watched

There are still open questions about how the system will work in the field, especially from wary city-dwellers who may think some police are corrupt. Each law-enforcement agency will have to develop its own policies and punishments for officers to ensure they use the new equipment properly and responsibly. The recorded video itself is tamper-proof — a user cannot access, delete, or alter the original file in any way — but the camera still requires an officer to hit the big Record button, and to refrain from turning it off if things are getting out of control.

Studies conducted by law-enforcement organizations point to video-evidence having a positive impact on reducing complaints. A U.S. study of over 3000 officers using in-car cameras found that 93 percent of civilian complaints were dropped or immediately resolved when video evidence was available. Another study, this time of a UK pilot program in which 300 officers used on-person cameras, found complaints dropped 14 percent.

It’s unknown if complaints drop because civilians see recorded evidence and realize they can’t get away with a false complaint, or if officers behave differently when they know they are being recorded. That knowledge may be the difference between an event being “caught” on video, like the Oscar Grant shooting, and by-the-book events being willingly filmed by the police.