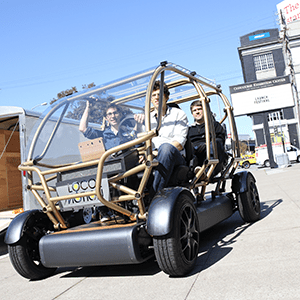 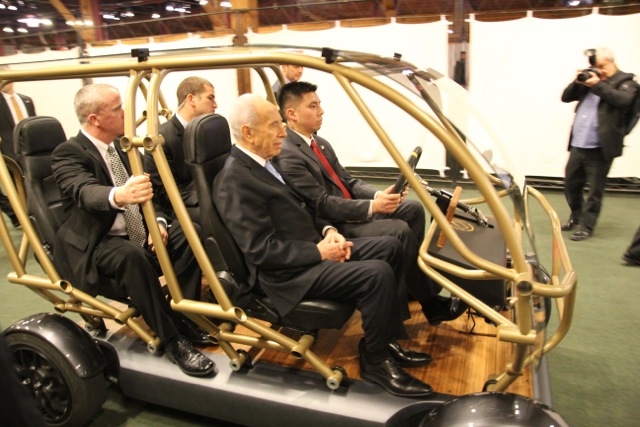 The Googleplex has its community bikes, NASA has golf carts, but the next wave in Silicon Valley on-campus transportation is a chauffeured electric vehicle you book on your iPhone.

Local Motion has built what it calls a “social vehicle,” which can sense how many people are in it and what the vehicle needs — a charge or a tune-up for example. The vehicle, pictured above with Israeli President Shimon Peres riding shotgun at the Launch conference, holds up to four people or two with cargo. It doesn’t require keys; instead you use an RFID-tag-embedded corporate badge to turn it on. Using an iPhone app, you book a ride and choose a destination, which is displayed on an LED sign on the front of the vehicle. Others can see where you are going and choose to ride with you.

The doorless, open design of the vehicle is meant so passengers can hop in and hop out quickly. The company wants to make the entire experience of getting from point A to point B more social and efficient, by ferrying around as many people as possible on each trip.

It isn’t just for sprawling corporate campuses. This electric vehicle is also street legal and can be driven around your neighborhood. The company doesn’t say how far it can go on a single charge, but its likely close to electric golf carts which can travel around 15 miles.

Local Motion has already signed up a few Silicon Valley companies for its pilot program, including Google, which has a campus covering nearly 100 acres of land.

Golf carts and other small electric vehicles have been used to transport people across large campuses for years, but Local Motion’s vehicle is certainly more funky than the typical golf cart. The company hasn’t released a purchase price, but as long as its comparable to what’s already out there, I can see Silicon Valley companies snatching up a few for their hundred acre compounds.

Local Motion is based in Silicon Valley and is currently raising its first institutional round of funding to supplement the $400,000 the company has already raised.