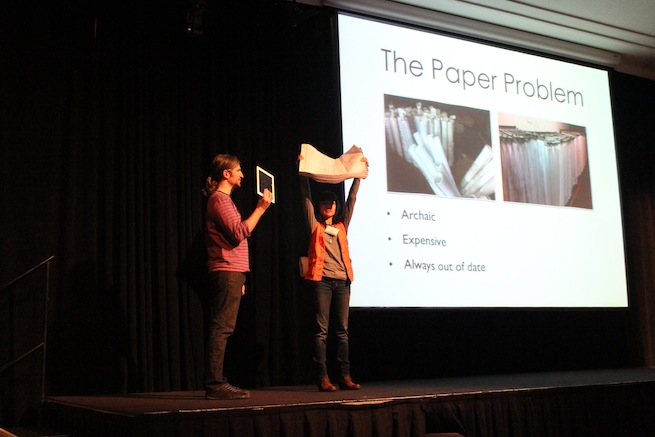 There was once a time when blueprints existed as big spools of paper, spread out across an architect’s desk. Despite computer-aided design, architects on the job still lug that paper around. PlanGrid is making the obvious and needed move to bring those paper plans to the iPad.

Founder Ryan Sutton-Gee explained at the Y Combinator Demo Day today that on any given construction site visit, an architect can tote more than $5,000 worth of paper with them. In the 1980s people started playing around with the idea of designing these blueprints on the computer with CAD. The software has taken an industry, which was so dependent on basic of tools like pen and paper, to a digital world that has created buildings otherwise unable to be designed.

But when it comes time to building those structures, the construction site reverts back to pen and paper. So, PlanGrid does the obvious. It takes blueprints and translates them into an iPad application. The app holds a “virtually unlimited amount” of blueprints, and as your construction project evolves, you can change the blueprint on the app, as opposed to having to re-sketch and print out an entire new sheet.

Already PlanGrid has made $27,000 annual revenue and has signed up 100 customers. It is currently being used on 900 construction projects.

PlanGrid is one of 39 companies presenting at Y Combinator’s Demo Day Spring 2012 event. Check out other cool companies making their debut here.