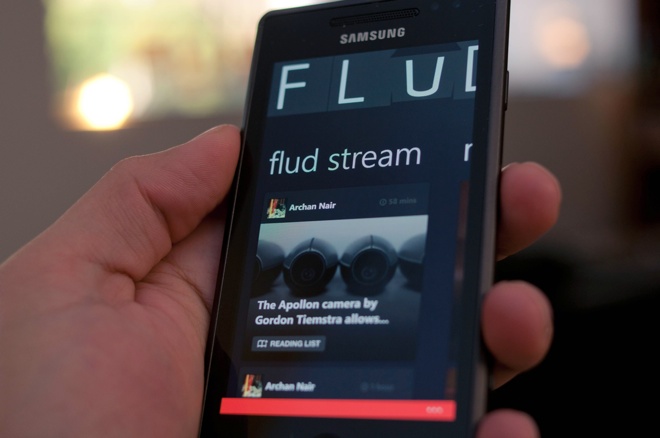 The social news-reader Flud isn’t just for iOS fans anymore: the company recently launched both Android and Windows Phone apps. And now, it’s planning to raise up to $8 million in a new round of funding.

Like competitors Pulse and Taptu, Flud is a fun way to keep track of your news (and it’s a bit of a looker too). But unlike the other apps, Flud is building up a social network of its own for news junkies, instead of just relying on Facebook and Twitter. You can create a profile, follow others, and directly share news to those following you. Basically, it’s a lot like the hot photo-sharing app Instagram, except with a focus on news.

“When you give people a profile in a specialized network so they can share content with each other, you start to see interesting things in interaction,” Flud co-founder and CEO Bobby Ghoshal told VentureBeat in an interview.

Flud lets you share stories on Twitter and Facebook, but Ghoshal tells me users are 600 percent more likely to “Flud” news and share with their followers. The company updated its platform and iOS app to function more as a social network back in December, but now users on other platforms will get their chance.

Ghoshal says the company is also working on launching a web app next month — so you’ll be able to use Flud for news outside of your mobile device. The company also recently updated its iPad app to take advantage of the new iPad’s Retina Display.

Flud initially launched an Android app back in August, but the company had to pull it a month later because of a variety of issues. “We ended up screwing that up a bit,” Ghoshal said. But the company has come back even stronger with its new Android app after working closely with Google. Similarly, Flud tapped Microsoft for help when developing its Windows Phone app.

San Diego, Calif.-based Flud is now working on raising between $5 million and $8 million in a first round of funding. The company doesn’t have many details to share on that round yet, but I wouldn’t be surprised to see some participation from its seed investors (who put in $1 million) Scott Belsky, Detroit Venture Partners, and Ludlow Ventures.