The original HTC Evo 4G was notorious for its massive (at the time) 4.3-inch screen, which needed a kickstand for additional support. So it’s no surprise that the kickstand makes a return with the HTC Evo One 4G LTE on Sprint, which sports an even bigger 4.7-inch display. As for fitting in your pocket…

The HTC Evo was the fastest selling device when it was released, so the new model has a lot to live up to. Past Evo iterations brought 4G and 3D display capabilities to Sprint customers before other carriers. The HTC Evo One goes up for presale on May 7th at $199.

“It’s the premier Sprint franchise,” said CEO Dan Hesse. The Evo One’s screen has a 720p resolution and runs Android 4.0.3 and HTC’s Sense 4.0 interface. It sports a rear 8-megapixel camera with an f/2.0 lens, and a front-facing 1.3MP shooter. It comes equipped with Beats audio, which is becoming a powerful brand among gadget heads in its own right.

“It’s not just all about the specs,” said HTC president Jason MacKenzie. “It’s about the experience. We’re doubling down on design to make sure the phones feel great in customers hands.”

The phone will run on Sprint’s upcoming LTE 4G network, which is scheduled to launch in the middle of the year in six markets.

Jonah Becker, the lead designer from HTC, says the aluminum space frame is blasted, chemically etched, then machine beveled to reveal the natural color, which makes phone super light, solid, and futuristic. He talked about how the large screen evokes a plasma TV, which makes the Evo One better-suited to watching movies and TV shows than phones with smaller displays.

You can hold down the camera button on this puppy and take 4 shots per second for 90 seconds, then easily pick the best one and delete the rest. (Leave that SLR at home baller.) You can do video and photos simultaneously, just tap the shutter button while you’re shooting or playing back video and you get a still shot.

If you’re still making old-fashioned voice calls, this thing has “HD Voice”, which uses multiple microphones and special software to cut out background noise. Kiefer Sutherland did the demo and man he sounds good over all the restaurant chatter. 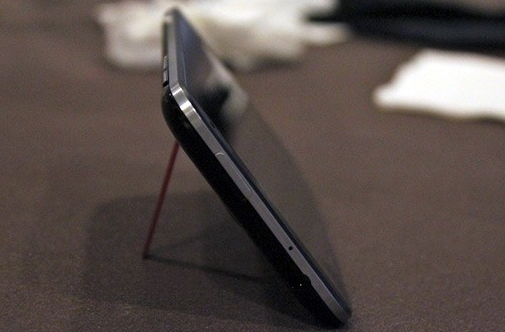