Business people have LinkedIn, journos and techies have Twitter, most of the world has Facebook, and now athletes have their very own social network. It’s My Play, from Max My Play, connects professional athletes with coaches, agents, and sports employees.

Going from playing sports in high school to playing in college, and making into a professional draft can be a complicated process. Coaches from universities scout out kids to play out their schools and connect with high school coaches, students try to market themselves on Facebook and Twitter, and agents are always looking for players once they get drafted to bring on as clients.

It’s My Play is hoping to be one spot where everyone involved in sports can connect with each other. Players can market their skills and show off highlights, coaches can scout new players to bring to their teams, and agents can find the new athletes. 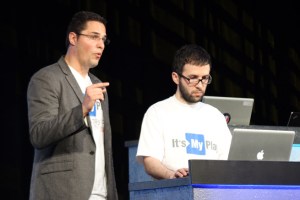 Above: It's My Play founder Momir Gajic

The social network is divided into two parts, one section for sports employees, such as coaches, agents, and recruiters, and one section for athletes, both pro and amateur. The hope is that players can connect with each others, amateur athletes can get advice from professionals, and recruiters can keep tabs on players they might want to add to a team.

While the idea is novel, it will need the scale of a Facebook or Twitter to make it valuable. Athletes are already marketing themselves on Twitter and Facebook, trying to put their name out there for the millions of people already using these top social networks. In addition, It’s My Play competes with LockerDome and World Sports Hub, two sport-focused social networks, as well as JockTalk, another company presenting at DEMO today.

Max My Play is hoping its social network will be better than others out there because it caters only to sports and provides a place for athletes to share stats, such as weight and sports records, that they wouldn’t share on Facebook, Twitter, or LinkedIn. Players can also upload highlight reels and images of them playing their sport.

One expert had nothing but positive things to say about the niche appeal of the focused social networking app. In a post-demonstration panel discussion, Color CEO Bill Nguyen said that he really liked the app because it’s “hard to market yourself as an athlete.” Nguyen went on to say that he believed in the company so much that, in theory, he would even work for them.

Founded in 2010, Max My Play has raised an undisclosed amount of funding. The company has 20 employees and is based in the Los Angeles area.

It’s My Play is one of 80 companies chosen by VentureBeat to launch at the DEMO Spring 2012 event taking place this week in Silicon Valley. After we make our selections, the chosen companies pay a fee to present. Our coverage of them remains objective.