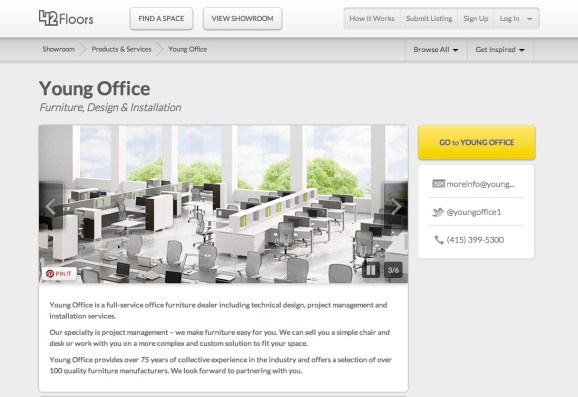 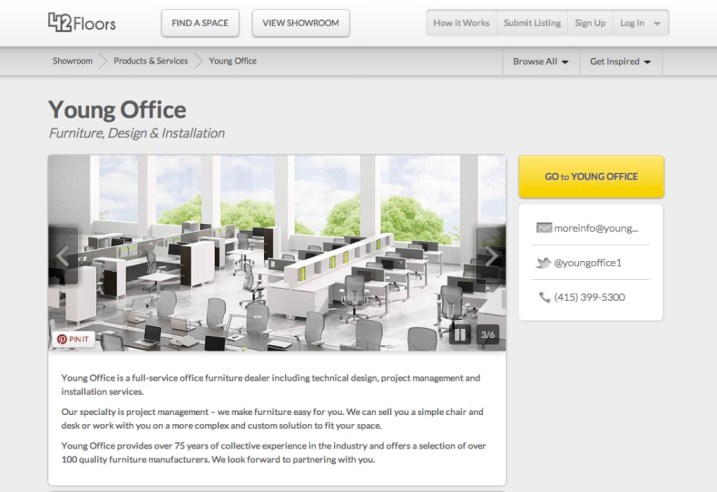 42Floors emerged from Y Combinator’s Winter 2012 class back in March as an office space search and discovery service with the mission of helping companies find their dream office.

The company launched with some strong rhetoric about technologically upending the commercial real estate industry and liberating data from fragmented listing sources; all goals that are still actively pursued.

But after gathering lots of feedback from their users and fellow startupers, it realized that finding a dream office is more than just a real estate transaction: it’s also all the work that goes in after the deal closes.

That’s why 42Floors is today announcing an extension to their office search site that puts the focus back on companies seeking their dream office: a one-stop, nationwide marketplace called Showroom where companies can get inspired and shop for office products and services from space planning to furniture to catering.

The site is currently limited to a simple showcase of wares and services that can’t actually be bought, but the next iteration will allow streamlined purchasing so that a dream office can be ordered and delivered with the same fluidity as buying and downloading an app from the App Store.

I had a chance to talk about the new development with co-founder and chief executive Jason Freedman, a provocative figure in startupland these days—one need look no further than his very public hiring stunts or his unabashed condemnation of “non-technical” startup founders.

But despite all the showboating, Freedman and his company display a keen understanding of what startups in Silicon Valley want and will pay for.

Says Freedman, “We know on a tactical level that we can make an office manager’s job a lot easier, but we also know that right now, if you’re a CEO, the chief reason to invest in your office is hiring.”

Hiring indeed. It’s no secret that Silicon Valley is experiencing a fiercly competitive talent crunch that’s forced companies to pursue every available avenue to successfully market themselves to potential hires. This includes the physical office space they inhabit, where each piece of furniture or catered meal plays a vital role in communicating the culture of that particular startup. Once compensation levels reach a certain point, factors like culture tend to sway employment decisions. 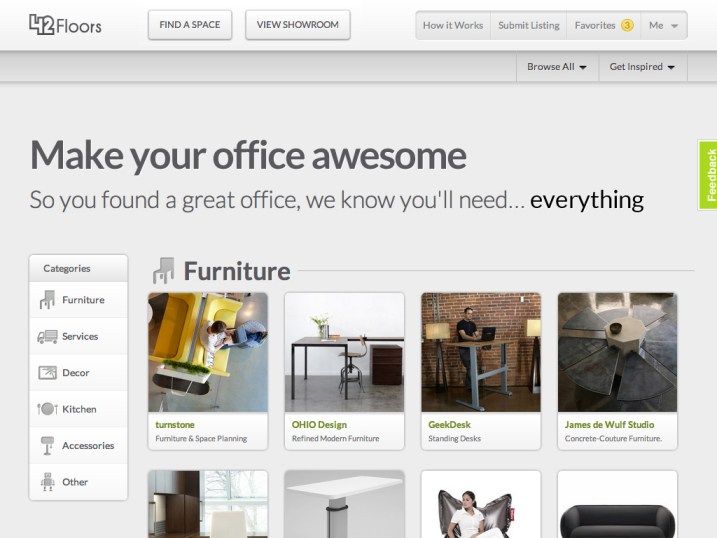 In terms of market positioning, however, Showroom is an oddity. There’s no denying that with all the money chasing deals in the Valley these days, there are a lot more companies that are willing to part with their freshly infused cash for offices with “personality.” At the same time, several of 42Floor’s own Y Combinator cohorts were acculturated on the “ramen-profitable” philosophy: running a lean operation that looks down upon anything other than shipping and iterating product. Odds are that most of those startups will be fine with their local IKEA offerings.

The current market for Showroom is thus limited to high-growth seed-stage and first-or-second round venture-backed companies. These firms are not bargain hunting: they can afford to allocate toward aggressively marketing their startup to new hires through swanky office space.

The company is aware of the need to be flexible, however. Version 2 is set to debut with an option to view Showroom offerings depending on what company one might be shopping for (ranging from a small two-person startup to, for example, a large financial services company).

No matter the size of the market, Showroom opens a new revenue stream for 42Floors as well. It plans to take a percentage of all transactions that go through the marketplace, adding to the company’s existing stream of referral fees from brokers closing deals procured through the main office search site.

42Floors has ambitious plans for the future. Freedman tells me that both iPhone and iPad apps are to be released “soon,” with interesting features like crowd-sourced photography of spaces.

The company is also set to announce a large funding round soon, which Freedman says will go toward further refining the product, strengthening ties with brokerages, and expanding to other cities (New York being first on the list).

When I last covered 42Floors, my parting note was that the company had a unique opportunity to use the showcasing of office spaces to drive community-based growth as a startup-for-startups, like what AngelList is for the startup funding process. Showroom is a good starting point that seems to take at least some of this commentary to heart.