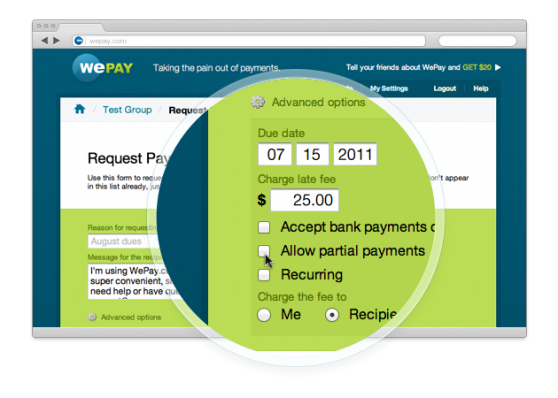 Founded in 2008, WePay is known for its easy, anyone-can-use-them payment collection services, aimed at individuals and “unsophisticated” online sellers. The company was originally designed to help friends collect money from each other, and it has since grown to cater to online businesses looking for a cheap way to collect payments.

The company added invoicing support in February, which helps merchants create simple invoices while also collecting payment. As of February 2012, WePay says it has served 25,000 customers — nowhere near PayPal’s millions of users. But that’s not stopping the company from going after its payment processing competitor and this $10 million investment may help it get a leg up.

Ignition Partners led the round, which will be used to expand the team and possibly develop mobile services similar to Square and PayPal. Existing investors Highland Capital Partners and August Capital also participated in the round.

WePay is based in Palo Alto, Calif. and has raised $19.5 millon in total funding.