Conventional wisdom nowadays might suggest that Apple’s iPhone 4S is “the best smartphone ever.”

But that’s not the case if you ask Siri, the voice assistant software installed on the 4S. Strangely enough, Siri answers the question by pointing to Nokia’s Lumia 900, as The Next Web first spotted. 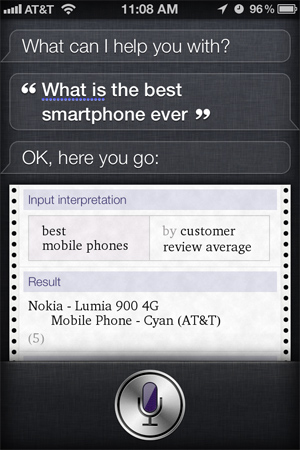 The reason Siri gives this answer should be obvious. Siri pulls quite a bit of its information from the Wolfram Alpha answer engine, which, in this case, used its “customer review average” for its results. Run the same question by Wolfram Alpha’s online page and you’ll get the exact same response.

What’s really interesting here is that Apple’s iPhone doesn’t even appear in the top ten of Wolfram Alpha’s results. The 4S is no. 13, even though it has received the same average rating as 12 phones above it. In contrast, devices like the Samsung Galaxy Attain 4G and, more inexplicably, the HP TouchPad — which is a tablet — take the top spots. That’s a pretty egregious error for a service that says it provides expert-level knowledge.

So what gives? Where does Wolfram Alpha itself get this information from? Source information for the query points to the Wolfram Alpha knowledgebase as the primary source, and Best Buy’s website as a background source. And that’s where the the trail ends. We’ve reached out to Wolfram Alpha for some more information on this and will update this article when the team responds.

Odd results aside, the news is heartening in its own way, as it shows that Apple didn’t attempt to tweak the answer to what is likely an oft-asked question.

Other variations of it are, on the other hand, a bit more in line from what we’ve come to expect from Siri’s more witty side.