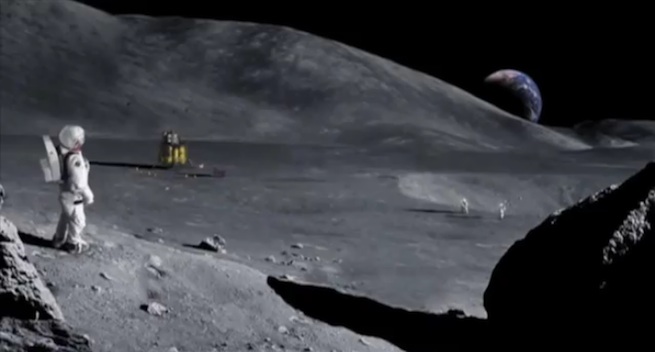 If you ever needed a reason to justify government spending on the space program, then I implore you to watch the fan video embedded below.

The video features a speech given by American astrophysicist, frequent Colbert Report guest, and all-around awesome personality Neil deGrasse Tyson. A few months ago, he spoke at a congressional hearing on the importance of a space program to drive not only innovation and the economy, but also ambition across the country. He used examples from the 60s, talked about why it makes sense and its impact since then.

The world gets tons of new technology that is pushed out to the private sector as a result of NASA’s work. If you need recent proof, look no further than the space travel happening in the private sector. (NASA contracts private companies, like Space X, to make orbital space missions so it can concentrate on things like mining asteroids and traveling to Mars.) There’s also plenty of evidence on the positive impact NASA has on the economy, from minor examples like NASA’s cute endorsement of the Angry Birds Space game to more substantive partnerships, like the effort to push cloud computing forward, and even launching the first iPhone into space.

At the end of the speech, Tyson asked the Senate committee to double NASA’s budget from a half-cent on every tax dollar collected to a full penny. Such an increase would raise NASA’s budget from less than $18 billion to a healthy $37.5 billion. I listened to the entire original address, which was about nine minutes long, and agreed with all of it. At the same time I was kind of frustrated because I didn’t think the majority of people would treat it as something beyond a frivolous expense that, with our current level of debt, we could do without.

And then I came across a portion of that very same speech embedded in a video titled Audacious Visions, which was created by film maker Brandon Fibbs.

“I’ve known Neil for almost a decade now, and he’s been an extraordinary friend and mentor to me in ways even he cannot imagine,” Fibbs told VentureBeat. “I’m not sure yet if he’s seen the video, but Penny4NASA contacted me yesterday and have been promoting it.” The Penny4NASA group he mentions is actually a community organization that was inspired by Tyson to urge congress to double NASA’s budget. (We’ve pasted Fibbs’ full response below.

Listening to Tyson’s words with images of space travel and historical events, not to mention the cinematic score playing in the background, makes for a far more powerful way to convey the message that we need to fund our space program. I won’t lie, I actually teared up while watching Fibbs’ video.

The point that got me was when Tyson says, “…we’ve got symptoms in society today. We’re going broke, we’re mired in debt, we don’t have as many scientists as we need, and jobs are going overseas. I assert that these aren’t isolated problems, but rather the collected consequence of the absence of ambition that consumes you when you stop having dreams.”

Let us know what you think in the comments.

VentureBeat reached out to Fibbs for more information about the video and his background. We’ve pasted his full response below:

Up until last year, I was a professional film critic (I have an MA in Cinema Studies from NYU) but recently left the East Coast to move to LA so that I might stop writing about other people’s movies and start making my own. I am currently the Research Coordinator on the reboot of “Cosmos,” Carl Sagan’s science documentary on which all others, for the last 30 years, have been judged. For a film guy who happens to adore science, it is pretty much a dream project.

I have, from a very early age, been a lover of space and the space program. My ex-wife, who is still a very dear friend, has worked in the industry for more than 10 years and was, up until a few months ago, when she left the agency, NASA’s social media manager. As such, I was able to regularly rub elbow with scientists, astronauts and other industry luminaries who changed my life and made me who I am today.

I began producing YouTube content (http://www.youtube.com/user/Fibbs1701/featured) just two or so months ago (with a video titled, “NASA: Risk is our Business” combining Captain Kirk’s famous speech with imagery from the past, present and future of the space program). My other videos, aside from a tribute to Hubble (“Beautiful Stars”) deal with the intersection of science and faith.

I’ve known Neil for almost a decade now, and he’s been an extraordinary friend and mentor to me in ways even he cannot imagine. I constantly have to pinch myself that the man who has become a very real celebrity and passionate advocate for science is someone I count as a dear friend. I’m not sure yet if he’s seen the video, but Penny4NASA contacted me yesterday and have been promoting it.

So far, the video has received 8,972 views in just over a day (and the number’s been stuck at that for hours, so I know it is far more). No video I’ve made it been seen so quickly. Though several of my others have more views (“Shock and Awe” at more than 30K and “What is Holy?” at more than 20K), they’ve had more time to do so.

My goal, moving to LA, is to produce films/television that work to advance science in our culture. It has become my passion. These videos, which I intend to keep making, is just one offshoot of that passion. I want to wake the world up to the wonders of science, and the space program happens to be one of my favorite aspects of it. No other government organization has the power to move us like NASA. It’s work inspires children and old men alike. And the information about the universe that it collects is, literally–in the truest sense of that word–transformative to us as a species. There has never been a time in human history in which we are more dependent on science and technology; yet, conversely, there has never been a time we’ve been more ignorant or distrustful of it. This is a recipe for disaster unless we do something soon.