The following is an excerpt from Scott Steinberg’s new book, The Crowdfunding Bible. The book is free to download at www.CrowdFundingGuides.com, or in e-book form on Apple, Nook and Sony Reader devices. Check out the previous excerpt: How a wristband for the iPod Nano raised $1M in 30 days.

Ed’s musical credits are far too numerous to list here, but he’s probably best known as the co-producer of the acclaimed compilation Song of America. Recently, he launched a campaign to produce and distribute a recording by Giuseppi Logan, hailed as one of the bright lights of free jazz, and a contemporary of John Coltrane. In the ‘70s, Giuseppi disappeared from view and remained lost to the music world for over 30 years, until 2009, when he was found playing for change in New York. Truly a labor of love, Ed saw an opportunity to bring Guiseppi’s work to contemporary fans of jazz music with his campaign, and, as he puts it, “support a legendary jazz player in his love of making music.”

Q.  What turned you on to crowdfunding?

A: I had approached several record labels for the project, but all of them turned us down. Almost all in fact, without even hearing the work we’d created. Frankly, this pissed me off, but it isn’t uncommon given the state of the record industry. Undaunted and somewhat emboldened by the rejections, I decided to take matters into my own hands (I’ve done this pretty much my whole music career). I had heard about Kickstarter for a couple of years and have some friends who’ve used it successfully, so I thought I’d give it a shot.

Actually, I wasn’t a big fan of crowdfunding. To me, it had a tinge of begging and the recording industry is humiliating enough without adding to it. However, when it was pointed out to me that in essence we were simply pre-selling our wares to fans we already had and potentially new ones as well, I realized that my prejudice was silly.

I thought that the reclamation of a heralded jazz legend was a compelling tale. Giuseppi had been missing for almost 40 years after a highly respected start in the ‘60s. The fact that he was homeless, penniless and so in love with music that he was playing for change in a New York City park made me believe that other people may be as moved as I was.

Q.  How did you plot and assemble your campaign?

A: I did copious research. We studied several, maybe even dozens of campaigns… why some were working, why others weren’t, why some were more attractive than others, etc. We also looked at which promotional devices they were using, what their networks were, and so forth.  We actually spent about a week or ten days studying other campaigns.

We used some of the more effective campaigns we studied as a jumping off point, but then followed the Kickstarter tutorial to the letter. We made a video, wrote a deep and compelling story, and explained the project as completely as possible: Kickstarter actually has copy on their site about this. Then we spent about four to five days writing and rewriting, all the while referring back to some of the more successful campaigns we saw.

My advice here: Study as many campaigns as possible! Take time to do the research. And take your time: I truly believe that a successful campaign is very carefully considered and composed.  But even then, there are no guarantees. If it wasn’t for a stroke of luck, getting a prime The New York Times cover story, we may not have reached our goal (although we in fact far surpassed it).  We spent four hours a day for three weeks after our campaign launched writing to every jazz journalist, every blog, every website and every record collector we could find. We sent out hundreds of individual e-mails and letters. We did our homework and worked hard…. but ultimately got lucky. 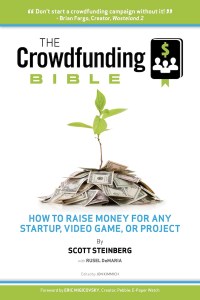 Q.  How did launching and marketing the campaign go?

A: We didn’t have any money left after creating the work (the recorded music album) after we had finished. So the launching, PR and marketing was all on my wife and I. (She’s actually the real brains of the operation!) No doubt, though, The New York Times article was the most successful coverage we received. Before it, after three weeks of extremely hard work, we had raised $855. After it, we’d raised $11,550.

One thing I will say is that print is not dead: Blogs are great, but overrated frankly. We spent so much effort and got little tangible return until that effort attracted a large, respected newspaper’s attention. It’s hard to say what was the least effective [strategy we used], because somehow all roads led to getting The New York Times interested in our project. They obviously heard about it from someone we had contacted, i.e. a blog, activist, or other journalist.

When it comes to marketing your campaign, be very careful about being honest with yourself about the true reach and breadth of your project and its potential. Ask friends and foes for feedback before you spend the time and effort. Sometimes it’s good to hear the bad and good before you gauge whether it’s worth it to dive in.

That said, after the campaign launched, I personally thanked each and every person who pledged, immediately after they pledged. This, I think, is very important. Some folks haven’t been exposed to crowdfunding before, and providing personal info and contacts. I believe it’s prudent, polite and comforting for them to hear from us right away. It seals the deal, if you will.  We also have posted two general updates to the entire group of funders to keep them connected and involved. After the campaign, we plan to write to them at least once a week and actually deliver the final product long before anticipated. We also plan on offering bonus perks before finally delivering like other music we’ve recorded from other projects for free.

Q.  What does Guiseppi think of all of this? And how do you think this will impact the development of projects like this or even something like Song of America?

A: I don’t quite know what he thinks. I know he’s overwhelmed by the goodwill and generosity of the people who have come to his aid, and he’s rejuvenated by it and maybe a little validated.  But since he’s been around a while, you might say he thinks it’s pretty wild!

I wish we had this when we did Song of America. The Song of America project was very successful by almost anyone’s standards and won many awards, but it may have reached even more people than it did [had we done it through crowdfunding], and given us the resources to do more. For example: We had originally intended to provide each public school in America with a teaching guide to go with the music album, and in fact professor Dean Roote of the University of Pittsburgh has created it, but we fell short of funding to realize this goal.

Q.  What lasting lessons would you say you learned from the effort?

A: The biggest stumbling block that we encountered was the immense number of social
media outlets, blogs and websites that you need to reach, and even then there are no guarantees.  Also, a lot of these people are insulted if you send them mass cc e-mails. Obviously, writing to each one individually is a large commitment.

[If I had to do it again], I also would have tried to meet with as many people in the jazz community in person as possible before we started. Yes, it would have been time-consuming and maybe somewhat not feasible financially and physically, but it could have made a difference.

Also worth keeping in mind: Once you do decide to dive in, you must be relentless. Nothing will come easy, and it may take up a good deal of your time, but once you commit, work harder than you ever imagined or you will regret it and may lose the opportunity. Campaigns won’t be easy, but can be very rewarding… and exhausting, for that matter.

Steinberg’s co-author, Jon Kimmich, will appear on a crowd-funding panel at GamesBeat 2012.