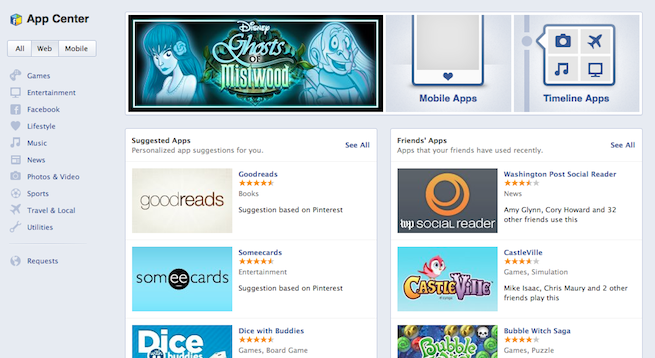 It seems like Facebook’s App Center is getting some global love. The social network’s marketplace is officially open to all users in the U.S. and seven other countries, and it will soon expand to seven more countries with new, translated apps.

In addition to the U.S., the App Center is available in Australia, Canada, India, Ireland, New Zealand, South Africa, and the U.K. It’s accessible from the black sidebar on the left-hand side of the iOS and Android Facebook apps, as well as on the left side of the news feed on desktops. Thus far, Diamond Dash, Angry Birds Friends, SoundCloud, and Spotify have all become some of the App Center’s most popular apps. All of these apps were created by companies outside the U.S.

Facebook announced the opening of the App Center in early June. It launched initially with 600 apps and points out that gaming company Kixeye reports “better than average revenue per users” for titles War Commander and Battle Pirates.

Facebook notes that over 80 percent of its monthly active users come from outside of the U.S. and Canada, so the company has plans to expand to even more countries in the coming weeks. These include Brazil, France, Germany, Russia, Spain, Taiwan, and Turkey. Developers who would like their apps to be launched in these markets are asked to submit translations to the App Center review team before July 13.