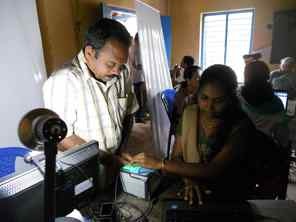 [This post is part of a series produced for VentureBeat by Singularity University.]

To combat corruption, a small group of entrepreneurs in the Indian government called the Unique Identification Authority has been rolling out a program to use biometrics — a technology that was once a hallmark of science fiction — to accurately identify its 1.2 billion residents.

At present, India’s departments work in isolation, maintaining a separate database to track delivery of government services to residents. Over time, systematic corruption and mismanagement have bred bad data, false information, and outright fraud. Poor laborers and migrant workers, in particular, are forced to travel far from their homes to collect their wages and benefits, having to dole out bribes to predatory middlemen along the way. A study by investment group CLSA estimated that, nationwide, of the $250 billion in subsidy and social spending on select programs over the next five years, over 40% will never make it to its intended target.

The biometrics program, which is nationally funded, has been ongoing since 2010 but just recently completed the first stage of enrollments, adding its 200 millionth enrollment several weeks ago. That’s already a population larger than any European nation.

Under the program — which will use iris scans and fingerprints — each man, woman, and child will receive an “Aadhaar” (meaning: foundation) 12-digit unique identification number over the next few years. For the poor in India, this promises to end a vicious cycle in which people cannot prove who they are and are thus denied what they are supposed to receive.

Biometric identification has been around for decades, but it has never been used on such a large scale. The technology must withstand India’s extreme weather, difficult geography, and multiple separatist movements. Large portions of the country lack reliable electricity, not to mention Internet connectivity. Developers must find a way to ensure high quality information across tens of thousands of enrollment centers. If these challenges can be overcome, there is a major opportunity to modernize and reshape the nation, and to set a precedent for the rest of the world, not only by making hundreds of millions of people recognizable by society, reigning in corruption, and improving government services but also by enabling a new mobile payment system.

Aadhaar numbers can serve as the key to bringing together various databases to clean out records. Electronic transfers can replace the inefficient and corrupt cash-and-goods distribution systems currently in place. Indians, for the first time, will be able to prove their identity in a matter of seconds with biometric scanners, regardless of location. And with close to a billion mobile phones in the nation, these Aadhaar numbers can serve as a gateway for India’s masses into the financial system.

The same systems used for transferring benefits can be used to create an economy based on mobile transactions. Two villagers could send each other money with little more than their identity numbers and an Internet connection. With an open platform, the Unique Identification Authority is inviting entrepreneurs to come build their own applications and uses to tackle the country’s multitude of data issues. Health insurance is one area that could be improved with this program — it’s currently rare in India because of how hard it is to locate and verify a person’s records.

The goal is to enroll 600 million Indians in four years. Many have expressed skepticism that they will reach their target, pointing to the numerous examples of costly, failed national identification programs around the world.  But with India already having reached the 200 million mark, it may yet quiet those naysayers.

In the process, India has industrialized the biometric space. Economies of scale have already made a drastic impact on the price of the technology. RS Sharma, Director General of the Unique Identification Authority of India has said that the agency has been able to collect each resident’s information for around $3, while it reportedly cost the UK more than $150 per person in its failed exercises just a few years ago. For most of the developing world, this would be affordable to implement.

However, the same systems that can bring accountability and transparency can be used for mass-surveillance and digitized discrimination. Privacy laws are still outdated and ineffective, and politicians have yet to overhaul the systems of enforcement. With so many different government agencies now able to store and access personal information, the potential for abuse looms large. The possibility of human error is present at every step, and there are questions whether India’s people and institutions are ready for such a dramatic change. Biometric identification has long been used for security purposes — now India will show the world how it can also be used to offer hundreds of millions their greatest chance at inclusion and a prosperous life.

Tarun Wadhwa is a research fellow with Singularity University, senior research associate with the Think India Foundation, and a researcher with the Hybrid Reality Institute. He is currently completing a book analyzing the impact of the global rise of digital identification systems. You can find out more about him on his LinkedIn page.