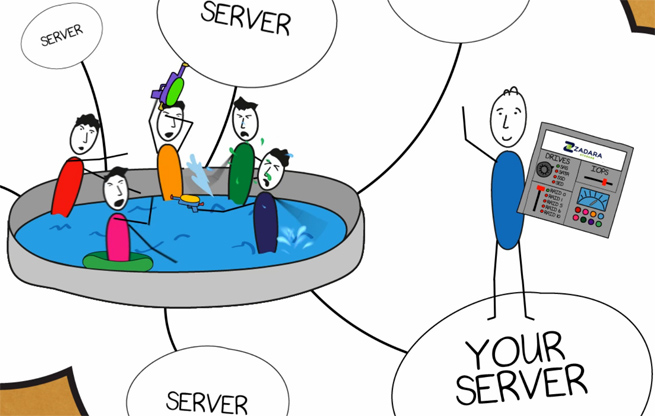 Cloud startup Zadara Storage has completed a $7 million first round of funding, cash that should help get the word out about its service that gives you much more control over the public cloud.

As we’ve written before, Zadara can give companies more control, speed, and security over their slice of the public cloud. Customers can select Amazon, Rackspace, or OpSource for their public cloud, and Zadara plans to add more options down the road.

Zadara offers its customers what it calls “Virtual Private Storage Arrays.” VPSAs are connected to your cloud servers, and you can choose between SSD, SAS, or SATA drives depending on your needs. To accomplish its ends, Zadara buys or rents hardware within the data centers of Amazon, Rackspace, and OpSource and then sells that storage paired with proprietary software. The VSPA solution is ideal for SaaS, databases, analytics, and critical applications.

“We give customers the opportunity to use dedicated drives and controllers, and they are more isolated in the public cloud,” Zadara CEO Nelson Nahum told VentureBeat. “With that, they get better options for speed, security, and more.”

The company’s new $7 million round was led by Genesis Capital Advisors and Platinum Management. The company also has two other investors that preferred not to be named but were also investors at StoreAge, of which Nahum was the CTO until it was acquired by LSI (he’s also a cofounder).

In early June, Zadara Storage reorganized and CEO Mark Spowart was replaced by then-CTO Nahum. Spowart maintains a small advisory role with the company. Nahum said he didn’t want to talk about his role change, but he said these kinds of reorgs are common.

Irvine, Calif.-based Zadara was founded in early 2011 and has 12 employees. The company won our CloudBeat 2011 Innovation Showdown against other smart contenders.