College campuses are becoming incubators for startups, offering encouragement in the form of classes to nurture young dreamers. This explains the influx of 21-year-olds making millions of dollars in investment before they can legally pop a beer.

Given the amount of preparation and forethought it takes to start a company, you may think it ludicrous to expect entrepreneurial success in a semester or two.

Yet, a handful of programs across the country have produced their fair share of fresh-faced CEOs. The lesson here? If they can do it in 10 weeks on a shoestring budget, you can too. The nationwide frenzy for entrepreneurship can in large part be attributed to a select group of college classes that train and mould lazy co-eds into fully-fledged business leaders.

Here is my run-down of the leading college classes that serve as launchpads for startups.

Launchpad: Design and Launch your Product or Service is not for the fainthearted. As the course description warns, you better have a burning desire to start a company. Those who are merely interested in becoming the next Mark Zuckerberg need not apply.

In just 10 weeks, students apply the values of design thinking, including protoyping, testing and iterating, marketing, distribution and presentation, to launch a successful startup. Do not expect to sleep. In return, the course directors (Perry Klebahn, former CEO of Timbuk2, and Michael Dearing, former eBay SVP) promise to change your life. 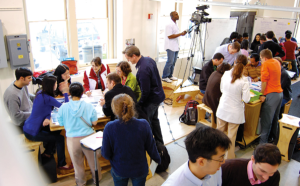 I believe it. The course is one of the most over-subscribed of all the classes at the “d.school”, Stanford’s illustrious design program founded by David Kelley, IDEO’s CEO. IDEO has already achieved iconic status as the firm that designed Apple’s first mouse.

Success story? Pulse News, an app that has raised over $10 million in funding to date. Cofounder Akshay Kothari’s reflections on the class: “The instructors force you to sign a paper which says you won’t get a grade for the class until you have publicly launched your product in the 11 weeks of class. Just build your product, and get it out the door. My cofounder and I built Pulse from scratch in five weeks.”

Stanford is a hotbed of entrepreneurial activity. Other options include Digital Media Entrepreneurship (for fellow new media enthusiasts), The Graduate School of Business’ startup class S356, and the d.school’s Entrepreneurial Design for Extreme Affordability.

MIT
MIT’s New Enterprises is far more quant-heavy than Stanford’s free-thinking, post-it loving design school. Students are led through a rigorous and analytical step-by-step process on developing a team, forming a business plan, raising funds, and combating any potential legal issues that may arise. It’s like bootcamp for nerds.

As you are reminded before enrolling, alumni have subsequently made billions of dollars in shareholder value and have raised hundreds of millions of dollars from investors. Lark (a silent alarm clock and sleep sensor) and Hubspot (marketing software for small and mid-sized businesses) are a tough act to follow.

The class has been around for several decades and is currently taught by the co-founder of Battery Ventures, Howard Anderson. Anderson is not looking for “cute little nonprofits”, he explains on the explanatory video, so bring your fair trade eco-clothing line elsewhere.

Washington University
Hatchery, the capstone class at the school’s center for entrepreneurship, boasts an unbeatable track record. Each year, roughly 65 percent of the class fulfills the American dream by launching a company. Ken Harrington, the course’s director, tells me here are 34 interns working this summer at ventures launched during the class.

How does it work? Entrepreneurs bounce ideas on a site for review by the students, who sign up to become team members. The fee for an outside entrepreneur in a commercial venture to participate is $3,500; it’s free for nonprofits. The students are expected to devote at least 150 hours to the class on coding, marketing, business development, and design.

The class has spawned a number of successful Internet companies in its tenure, including Rare Genomics Institute and Answers.com. It is unique in the variety of companies it produces, spanning social entrepreneurship, community projects, games, life sciences, and more.

Northwestern
NUvention, the flagship course at the Farley Center for Entrepreneurship & Innovation in the engineering department, is one of the only classes that segments students based on their interests. In this case, students can select from tech, medical innovation, or energy. In the first quarter, the students develop their ideas and build a prototype, which is launched into the market during the second quarter. 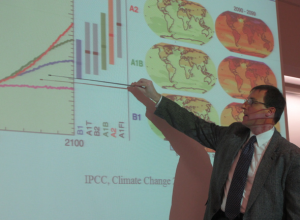 Above: Teaching a class at NUvention Energy

The biggest success story from the web track is Adaptly, a social media ad server and analytics platform that is generating over $10 million a year for its founders, Nikhil Sethi, 24, and Garrett Ullom, 22. Click here to review the teams from the graduating class of 2011.

Worthy of honorable mention
Check out Harvard Business School‘s Building a Successful Enterprise and the University of Michigan‘s suite of classes in the entrepreneurship track, which produced HandyLab, Inc., a diagnostics company started by Jeff Williams, which was sold to BD for $275 million. The University of Chicago’s Booth School of Business offers “experiential” classes, including Ventures Lab, where students are paired with startups to gain real-world experience.

(Full disclosure: The Stanford d.school has a special place in my heart. As a humble journalist enrolled in d.garage, a program that rivals “launchpad” in its intensity, I picked up key skills like prototyping, forming a business plan, and of course, brainstorming with the trademark multi-colored post-its.)