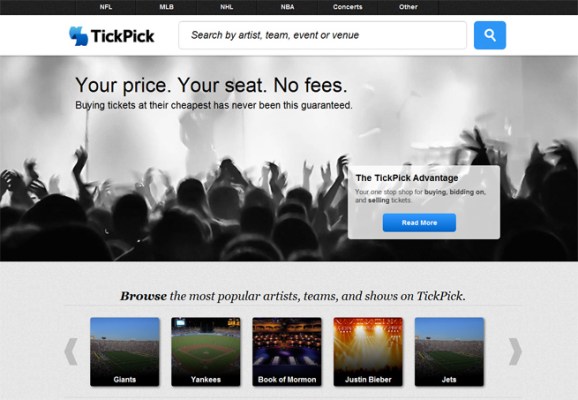 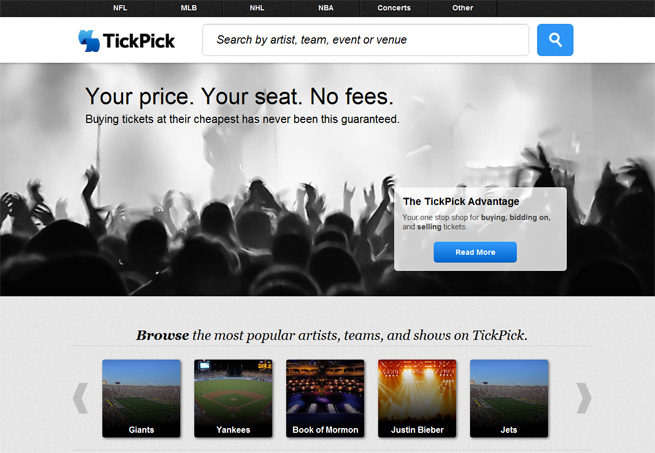 Secondary ticket sales startup TickPick has revamped its site and sales algorithms in a new effort to take on StubHub and Craigslist, the company revealed Tuesday.

TickPick offers a marketplace for reselling already purchased tickets, but it differentiates itself from StubHub by costing less to use and giving more support to buyers and sellers. Similar to Priceline, people can place real-time bids on tickets and sellers can accept or reject the offers. The service also includes algorithms to highlight the best possible deals on tickets.

“TickPick is a user-friendly ticket supercomputer,” TickPick CEO and co-founder Brett Goldberg told VentureBeat. “Behind the design is a monster set of algorithms that chew through ticket data, feeding our users the best tickets only, leading them to make smarter purchases.”

As of Tuesday, the TickPick site (see the above photo) has been revamped with a more polished interface that will highlight the tech behind the service. Clicking on the “New York Yankees,” for example, brings up a page of game dates available with Buy, Bid, and Sell icons. When you click on Buy, the company runs the number and rates tickets with A+ through D grades. In the near future, the site plans to add more partnerships with professional sports organizations to help it expand.

As someone who attends many sporting events and concerts himself, Goldberg said he particularly disliked StubHub’s approach to secondary sales. He said StubHub charges sellers 15 percent in fees; it charges buyers 10 percent. On TickPick, sellers pay a 10 percent fee and buyers pay no fees.

“StubHub is no different from Craigslist, just more organized,” Goldberg told us. “It’s old and lacks the technology to guide users to the best tickets.”

New York-based TickPick launched in 2011 and has raised $250,000 in seed funding thus far from various angel investors. Goldberg said the company has three full-time employees and is currently looking to hire a head of customer support and a head of digital marketing.