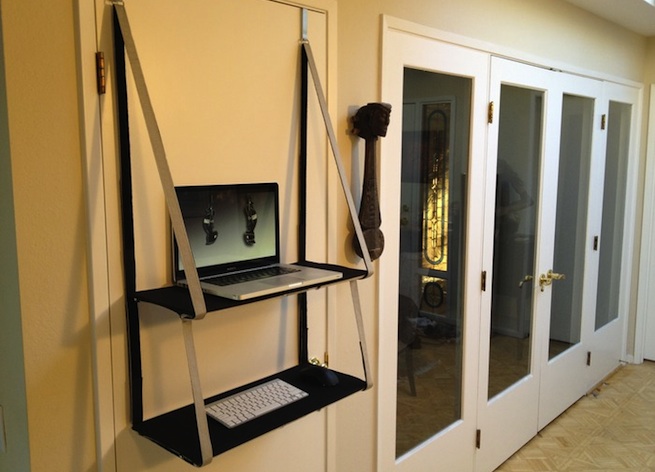 You probably sit too much — I know I do. Given the sheer amount of time that our generation spends hunched behind a computer screen, chiropractors must be absolutely raking it in.

Parked on our backsides for hours at a time, bloggers and programmers may be the worst offenders of all. It’s no surprise that standing desks are the latest craze to hit Silicon Valley and other tech hubs.

Seeking relief from back pain, some of the most pragmatic solutions to hit the market were built by tech entrepreneurs in their spare time.

One of the most popular is the Standesk 2200, hacked by Colin Nederkoorn, founder of Customer.io for just $22. At the co-working offices at General Assembly in New York where he debuted the desk, word spread quickly. Soon all the cool entrepreneurs wanted one. Nederkoorn wrote on a blog post that the first users were fellow founders from hot startups like Stripe and Opani.

Nederkoorn hit a nerve with the community; his announcement received well over a hundred comments from fellow standing desk converts.

Meanwhile, serial entrepreneur, Dan McDonley, was able to exceed his funding goal on Kickstarter in just 24 hours to bring to market one of the world’s first portable standing desks. 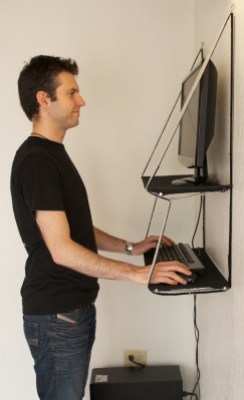 Above: McDonley gets to work, answers emails like a ninja

McDonley’s “The Ninja Standing Desk,” is designed for mobile, young professionals. It hangs from any door, wall, or cubicle, and folds up so you can carry it with you.

He told me he was experiencing debilitating back pain numbness in his elbow from sitting at a computer all day — he created a prototype for his personal use. It worked, so he began taking manufacturing classes at TechShop, the mecca for hardware folks, located in San Francisco and Menlo Park.

“I was assassinating my deadlines, slicing through my work day, while feeling healthier and nimble as a ninja,” McDonley explained on the project’s Kickstarter page.

After raising $30,000, a far higher sum than expected, McDonley is focused on keeping up with orders.

If a standing desk is for you, the Internet is filled with useful tips for you to build your own. Order cheap parts from IKEA, and you can assemble one on a $20 budget in a matter of hours. But if you’ve got dollars to spare, this piece in Wired’s Gadget Lab is the most comprehensive review of the best on the market.

I’m told by friends (my roommate, a tech entrepreneur, is a standing desk evangelist) that standing for hours on end takes some getting used to. If you stick it out, you can expect to shed calories and to see your energy levels to drastically increase. In fact, your doctor would tell you that even taking a 5-minute standing break every hour is an improvement.

If you’re not convinced, check out this article in the New York Times, suggesting that sitting is a lethal activity. If Dr James Levine’s hard-hitting campaign against our “chair-based lifestyle” doesn’t spook you even a little bit, I don’t know what will.