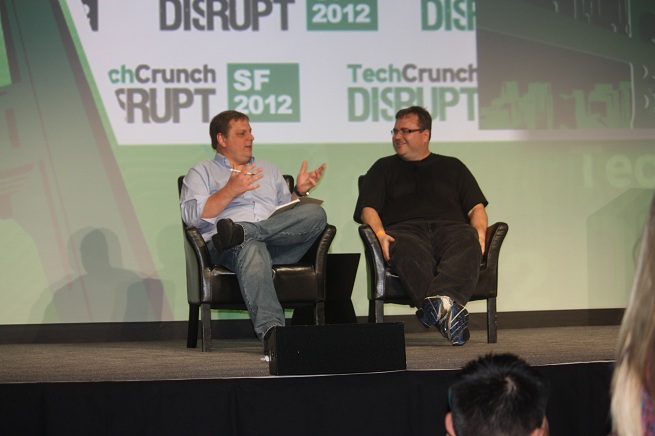 SAN FRANCISCO — Reid Hoffman has become, in Michael Arrington’s words, “ridiculously wealthy” as the founder of LinkedIn and Greylock Partners.

Arrington, a former editor of Techcrunch and the founder of the $20 million Crunchfund, asked the impolite question of what it’s like to be so rich at the Techcrunch DisruptSF conference today in San Francisco. Hoffman is one of Silicon Valley’s newly minted billionaires. He had the foresight to invest $37,500 in Facebook years ago at a $5 million valuation.

“You are wealthy, ridiculously wealthy,” Arrington said in an onstage interview with Hoffman. “Nothing gets you out of bed if it isn’t for $1 million or more. What’s different?”

Hoffman said that he had long wanted to be affiliated with universities, teaching classes on entrepreneurship. Now, when he shows up, he usually is asked to give a donation. He also said he doesn’t own a private jet, but now he knows what it is like to be on a private jet that is carrying only him.

“It’s a strange feeling,” he said.

After that, Arrington asked Hoffman his opinion on a series of issues in the news. Meanwhile, Hoffman is doing what he always does: investing in startups. He created Discovery Fund, a seed-oriented fund with just $15 million, that has invested in 75 companies over the past couple of years. About 40 percent of those have done well enough to get follow-in funding.

Asked if he believes Facebook is a good investment now, Hoffman said that he believes in the social network’s long-term position. The question, he said, is how it plays out in the next couple of years. If it stays at its current stock price, Facebook will be a good investment at some point. He thinks Facebook’s management team is strong and it will be able to make money on mobile social networking at some point. But there are a lot of stock lockups coming due (where employees and others are prohibited from selling stock for a period of time), and Hoffman says he will wait to see the impact of those lockup releases on the market before he starts investing again. Asked what Facebook could have done to address its stock price and have a better IPO, Hoffman said that he focused a lot on long-term investors when LinkedIn went public (and had a successful IPO).

Hoffman is also on the board at Zynga, which has also hit tough times with one weak quarterly report.

“[Zynga founder] Mark [Pincus] is not the furniture-throwing type,” Hoffman said. “Mark is very committed. The social gaming space is still very interesting. Zynga has the best position in it. The fast cycle that Zynga pursues is the best for the market. The negative side was it didn’t diversify its platforms fast enough. The company knows they need to do that. The path forward is relatively straight forward.”

He cowrote a book, The Startup of You, about how to think about your personal career path. It sold 120,000 copies but did not inspire the movement he wanted to create.

“It’s about how to stop thinking of your career as a ladder,” he said. “To get to a dream you haven’t gotten to yet, you have to think of it more as a jungle gym, where you invest in yourself as an entity.”

Hoffman said he believes that the next set of IPOs will be enterprises that exploit social opportunities. As for Yahoo, he said that new CEO Marissa Mayer faces a long-term turnaround task, meaning it will be one to three years before she gets results.

As for Silicon Valley incubator Y Combinator, Hoffman said that he appreciates its goal of trying to fund a lot more than just five to 15 companies a year. But he said stresses are showing, like whether Paul Graham and his colleagues can really understand the incubator’s startups when scores of them are in a class.

“Are they really up to speed in helping everyone as they want to?” Hoffman asked. “They have to make a decision between staying at this level and keeping up their level of service.”

Arrington tried hard to get Hoffman to say bad things about Twitter, which has changed the rules for its third-party developers who are creating apps for Twitter’s platform. Among those who have problems with Twitter is LinkedIn itself. But Hoffman would only say that Twitter’s decision to cut off a number of developers was “partial bullshit.”

He said, “It’s clearly not fair to developers. They based their livelihoods and product strategy on Twitter. On the other hand, Twitter has a responsibility to its vision and its shareholders. They needed to put some order to the chaos. It sucks to be a developer and they have legitimate gripes.” But Hoffman said he was pleasantly surprised that Twitter’s actions didn’t permanently damage LinkedIn.

Asked if social was over as an investment, Hoffman said, “We in the Valley tend to say that social is over. But we are social animals, creatures of the city as Aristotle would say. I think social is still very alive.”

Anyone who says that everything has been invented in a category is exhibiting a “failure of imagination,” Hoffman said.