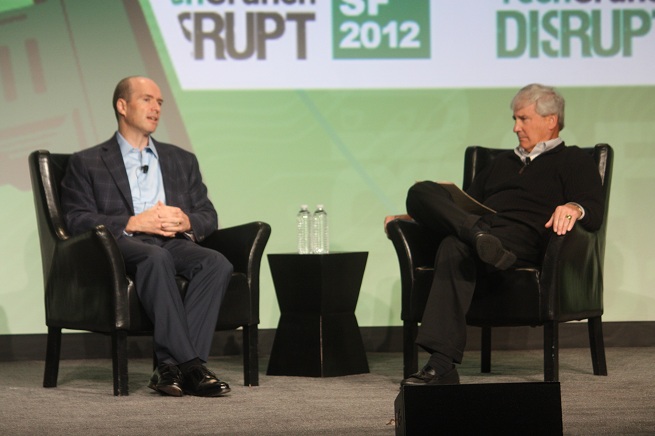 Venture Capital maven Ben Horowitz claims to be a far better investor than a CEO.

During his chat this morning at TechCrunch Disrupt, he delved into the dynamic relationship between venture capitalists and entrepreneurs and what he looks for in a startup.

His firm, Andreessen Horowitz, has one of the most illustrious portfolios in the field. It’s backed groundbreaking companies like Facebook, Groupon, Twitter, Skype, and AirBnB. AH not only has a reputation for excellent judgment and foresight but also for leading entrepreneurs toward success. Its general partners offer valuable guidance as well as financial support.

“I thought it would be good to have a firm that really understood the process of building a firm intimately,” he said. “We want the [general partners] we select to have experience running or founding companies. The other part of it is that you don’t have a network when you are a founder.  You don’t know the press, 30 good execs to hire, 50 engineers, or Fortune 500 CEOs you can call and get to buy products. Our organization has built a systematic comprehensive network across those things, so as a founder you can plug into a professional CEO network.”

Some investors focus more on the people while others weigh ideas and market share more heavily. Both are important. But ultimately, Horowitz says it comes down to innovation.

Whether it be a social media or network virtualization company, hiring the right people to execute the idea and support the founders is key.

“Like [former general and and secretary of state] Colin Powell said, ‘Hire for strength and not for lack of weakness,'” Horowitz said. “You are not looking for a prototype sales or marketing person or prototype engineering head, you are looking for the person for your company who is the right person at that time. When you look at executive failures, no one ever hires someone incompetent with bad references. all the mistakes in exec hiring are because they don’t fit with your company.”

Culture within a company and a symbiotic relationship between investors, advisors, board members, founders, and employees: The day-to-day rigors of startup life are challenging, as are navigating the murky waters of scaling, pivoting, fundraising, and taking a company public.

“You need people on the board who will keep you from freaking out and losing your mind,” he said. “A key to being a good CEO is being insane and being courageous. You want an advisor who has built companies and who understands the concept of innovation.”

Most of the talk dealt with entrepreneurs and investments, but Horowitz also discussed the evolving state of technology and tech companies. He explained his partner Mark Andreessen’s hypothesis that software is eating the world.

With expanding capabilities for technology and the infiltration of the Internet into industries that have traditionally functioned offline, the possibilities (and investment opportunities) are endless.

As Horowitz said, the dinosaurs are being replaced by the birds.