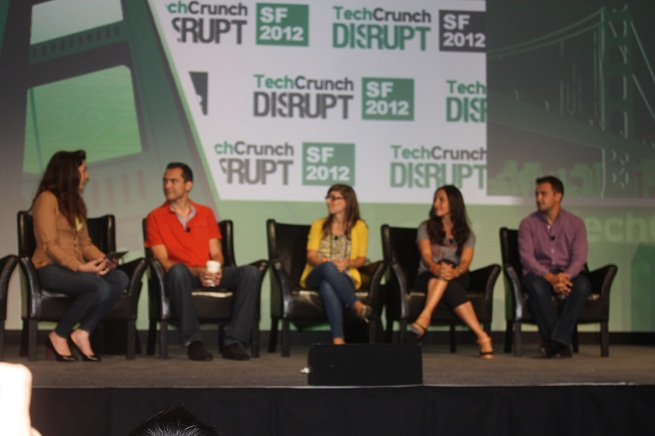 Disruption may not always have a purpose or direction (as entrepreneur Jack Dorsey said this morning), but it’s always happening. The latest crew of entrepreneurs to shake up the status quo spoke on a panel this morning about how to pull off disruption — and live to tell about it.

“Some of you have disrupted the disruptors,” Tsotsis said, noting how no company can rest on its laurels once it changes a market. She asked them what motivated them to take their first steps toward creating disruptive startups. Some entrepreneurs knew exactly what they were changing, while others stumbled into it.

Busque said, “For me, it was deciding that was available to do what I wanted to do wasn’t good enough. It was about finding a way to innovate and do something better.” She founded her company in 2008, after she found she needed help getting a 100-pound bag of dog food. “We wanted to bring the old models of work into a new era,” she said, taking on workplace fixtures such as temp agencies.

“It was about changing the rules of the game,” said Blecharczyk, the cofounder of Airbnb. He originally thought he could get people to rent out their homes whenever big conferences came to a city and the hotel rooms were overflowing. He pivoted when the real opportunity became obvious.

“It took us about a year to realize that the real opportunity was in making it as easy to rent a person’s home as it was to reserve a hotel room,” he said.

While Morin said, “For me it was about matching my own passion with this massive gap in the market. Martha Stewart was my inspiration. But the older I got, the more out of touch I got with her.” She was getting married and wanted to establish her own kind of style for women in their 40s.

And for Zimmer, it was “about making the world a better place. We saw that 80 percent of seats were empty on highways and the second-highest expense in the home was transportation. We set out to make transportation more social.”

Everyone on the panel recognized the value of protecting customers so that the company deserves the trust that customers put into it. Airbnb had a crisis when one renter trashed the home of a host who had rented the place out on Airbnb. The company didn’t move fast enough to pay for the damages, and it faced a public relations outcry. Now the company provides insurance of up to $1 million for property damage.

“We realized we had to become more proactive,” Blecharczyk said. “We hadn’t innovated on the trust and safety issue in our first few years. Coming out of that incident led to our host guarantees.

Lyft’s social ride-sharing program has only been alive for 11 weeks. But Zimmer said that the company has already implemented background checks for safety reasons. It also provides insurance for potential liability, up to $1 million.

“We wanted to go above and beyond what any other alternatives would do,” Zimmer said.

The companies got to their first 10,000 users in different ways. Airbnb benefited from the 2008 Democratic National Convention in Denver, Colo. There was a lot of publicity around the fact that it was impossible to get a hotel room. Word of mouth about Airbnb spread fast. After that, Airbnb expanded fast to stay ahead of its rivals.

Busque said she focused on a small mothers group, where women needed helpers they could trust. Once it worked with them, Task Rabbit spread to other groups by word of mouth. By starting small, she was able to work out quality issues early and deal with the issues of trust through ratings and reputation rankings. Zimmer said Lyft painted pink mustaches on its cars so that people would start talking about them.

What markets are ripe for disruption ahead? The panelists said there are still plenty of industries that have not embraced social sharing. The so-called sharing economy is just getting started, Blecharczyk said. Morin said that each wedding her company handled could lead to 150 or more guests talking about her startup.

Zimmer said entrepreneurs should go after the places where people spend the most money: the home and transportation.

“In a tough economy, it’s important to think about where the financial priorities are,” he said.

Morin said, “Your wedding and your kids are your biggest expenses in a family. Pets are another big category.”