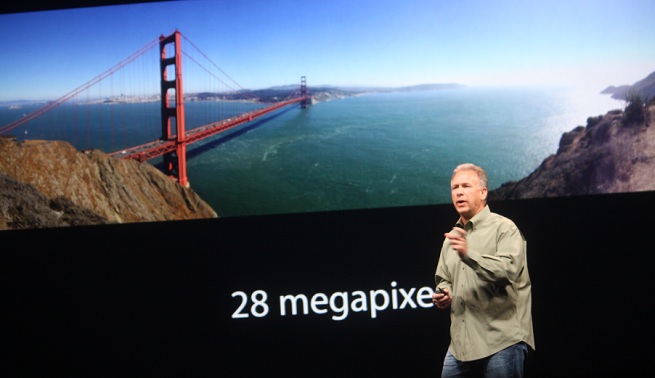 Apple’s certainly keeping in line with its ability to pay attention to the smaller details in its new iPhone 5, and this is absolutely true for the device’s camera.

Despite being smaller, the camera features a number of improvements, including an 8 megapixel sensor, 3,264 by 2,448 photos, backside illumination, hybrid IR filter, a five-element lens, and way more. The camera snaps photos 40 percent faster, features a dynamic low-light mode (so pictures you take in dimly lit areas don’t suck) and enhanced spatial noise reduction, as well. This might all sound like mostly gobbledygook to those who can’t take a picture to save their lives (myself included), but that’s exactly who this camera is for.

Additionally, Apple is including some new features along with the camera, like a panorama mode that takes 28 megapixel shots. The company displayed a panorama shot of the Golden Gate bridge at today’s iPhone 5 event (shown above), which looked rather impressive. The company also added a new Photo stream sharing feature. So when you want to share photos with friends and family during events, it’s much less of a hassle to upload and point links.

As for the video side of things, the iPhone 5 camera records in 1080p with improved video stabilization, face detection software, and the ability to take photos while you’re shooting a video. These are pretty awesome enhancements — especially for journalists with shaky hands after drinking several cups of coffee.