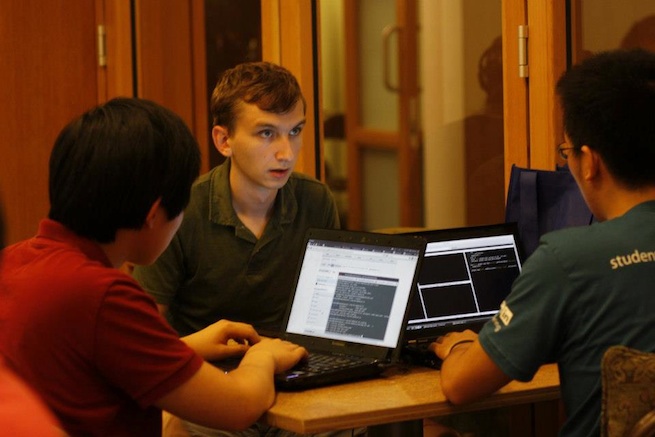 Silicon Valley hackathons, once the pinnacle of nerd cool, are typically thrown today by new-to-the-area startups who don’t know any better.

In the Bay Area, if your tech company needs to expand its core team of engineers (join the club!), you better have an acquisition budget. Alternatively, hop a flight to the East Coast, where hackathons like Pennapps are the epicenter of a nascent hacker community.

Pennapps, I’m told, is now the largest student-run hackathon in the world. This year, 320 students from over 30 East Coast schools participated in the event, which took place September 14-16.

“It’s exciting for me to see how the culture of campuses, especially on the east coast, is changing,” said Dan Getelman, the chief technical officer of learning-management startup Lore. “Even a couple of years ago, a lot of the hackers at PennApps would have been destined for banking, but now they’re getting to experience the thrill of building thing and hacking.”

Lore is one of the sponsors of the event. A few of its young founders participated last year, before dropping out of the University of Pennsylvania to work on their venture-backed company full-time. At Pennapps, big-name tech companies like Facebook, Dropbox, and Twitter were also waiting in the wings, hoping to catch a few minutes with the most talented coders.

As is typical with hackathons, no one slept or showered for 48 hours. Illuminated by computer screens, students sit in silence, and the only sound you hear is the furious tapping of laptop keys. As fans of the movie The Social Network know, this kind of intense all-night hacking led to the development of Facebook by young collegiate Mark Zuckerberg during his time at Harvard.

Investors, increasingly looking to feed tech talent into their portfolio companies (Bain Capital Ventures’ Startup Academy is a good example), were also in attendance. As you’d expect, the winners were given the opportunity to participate in hackathons and internships in Silicon Valley for the summer. Check out the full list of sponsors here.

As with all worthwhile hackathons, one of the projects has already gone viral. Hack My Facebook, a site you can use to mock-hack your own Facebook account to play a practical joke on your friends, won a $500 prize from AddThis. The big winners of the weekend were:

Let’s hear it for girl power! Fairly atypical for a male-dominated hackathon, J.A.M’s winners are three female engineers from Penn. They told me they plan to use the money to continue development on the app, still a prototype in its current form, and extend it to a broader range of musical instruments.