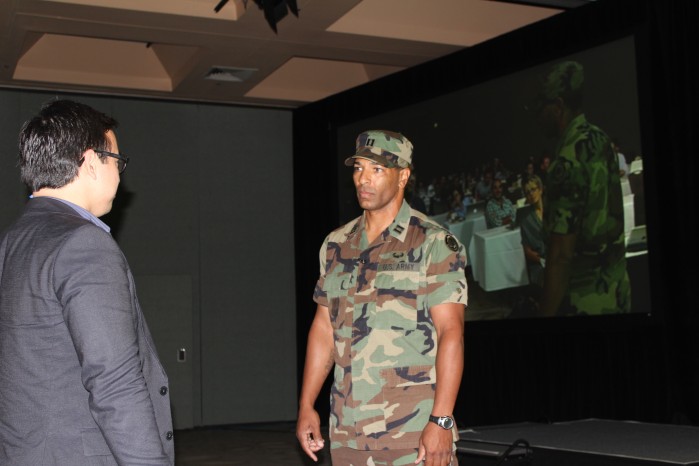 So, a bunch of brainiacs walk into a neurotechnology class at MIT. That’s not a joke setup; it’s how Neumitra, a stress-killing startup, began.

Stress can completely paralyze some of us during life’s most important moments; for others, it’s more of a silent killer, leading to anxiety, insomnia, poor digestion, alcohol or drug abuse, and other health problems. And during that MIT class in the fall of 2009, Neumitra’s founders “realized that effects of stress represent perhaps the largest unmet need in society today,” said Robert Goldberg.

Goldberg is one of the startup’s co-founders; he’s also a cognitive neuroscience PhD. Today, he and the rest of the Neumitra team are unveiling Bandu, a small wristwatch-like device that will monitor the body for signs of stress, then take steps to counteract it.

An audience member named Vince was calmly wearing his Bandu in the front row at DEMO when a man dressed in military fatigues emerged from the sidelines to yell at him in front of the crowd. This exemplified a triggering situation, and the audience could visibly see his stress levels spike.

“It is bold to come into a place like DEMO and amp up the stress levels,” said sage panelist Scott Sangster, CEO of Health in Reach. “Bio feedback is big right now and there is a lot of going on in digital health with the quantified self. At some point though, how many devices can you have on your arm?”

Bandu detects changes in your motion, temperature, and skin conductance to identify signs of increased mental stress. If stress flag start to fly, the device will alert you with an invitation to use your smartphone to take your mood in a different direction. It might ask you to listen to some music, play a game, or call a friend or family member.

“Your phone becomes a new friend during your most stressful times,” said Goldberg. “You can even load custom reminders, such as messages to ‘Take five deep breaths’ or ‘Close your eyes and smile’ to display directly on Bandu.”

Not only does the watch act as a cheer-up reminder system; it can become incredibly intelligent on stress triggers for you personally and for humans in general.

“For instance, we heard from a veteran with PTSD that Whole Foods was causing flashbacks,” said Goldberg. “But it took him three years to figure out this sad fact.” Adding GPS capabilities to Bandu, he continued, produces a whole new set of potentially useful information.

“Imagine mapping whole cities and countries based on when and where stress spikes,” he said. “We dream of a future where stress is a score that we all know and discuss, in the same way we talk about our weight or blood pressure. Imagine how a view of the stressed planet would change how we see stress!”

With that large and detailed a data set, the medical and science communities would also be getting a much better understanding of stress, where and why it spikes, its impact on our lives and culture, and how we can better control it.

Goldberg started down the neuroscience path because of a family history of mental illness; however, his focus shifted as his career progressed.

“My co-founder, Anand [Yadav], had been working on product development at the Human Genome Project and discovered the power of meditation in his personal life. In our first conversation after class, he suggested a wearable sensor for helping the mind and immediately caught my attention.”

Goldberg and Yadav immediately realized that wearable, mobile devices with stress-detecting sensors onboard could drastically help both the clinical and consumer communities seeking to reduce the effects of stress. And since the sensors would be gathering more than 100 hours’ worth of data each week, they’d also be creating vastly personalized data sets and action plants.

“When Safiyy [Momen] came aboard after seeing our presentation in class,” said Goldberg, “we had someone with a deep background in machine learning for missile defense and cognition to help interpret all the data that would be produced.”

Starting now, the Neumitra team is trying to crowdfund the Bandu’s commercial debut. You can join in the fun at StressFriend.com.

“The earliest adopters are encouraged to buy two devices,” said Goldberg. The buyer will get one unit, and the other, he said, “We’ll give on their behalf to patients such as veterans with PTSD and mothers with panic disorder, through researchers, such as those at Harvard Medical School and the Veterans Administration.”

“As we scale these technologies to wider and wider audiences, we look to add the features that are most in demand,” said Goldberg.

“Building hardware is extremely, um, hard, so we aim to be measured in our approach and roll out new capabilities in small batches first before we release widespread products. … We don’t expect to solve stress by ourselves or in one quick leap.”

Neumitra is one of more than 75 companies chosen by VentureBeat to launch at the DEMO Fall 2012 event taking place this week in Silicon Valley. After we make our selections, the chosen companies pay a fee to present. Our coverage of them remains objective.