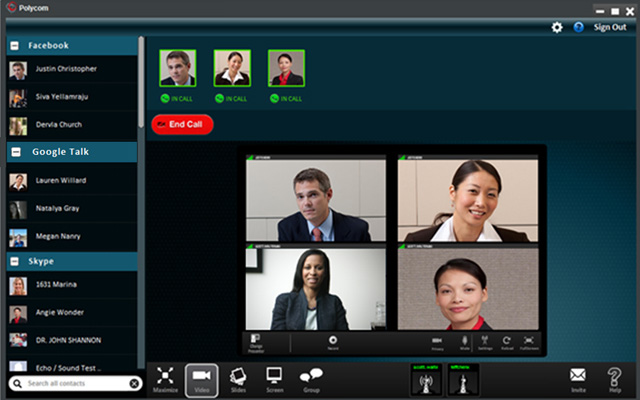 Polycom, maker of video conferencing technologies, today unveiled a new software suite it claims will be worth $12 billion by 2015.

The cloud-based product for the enterprise integrates with the most popular consumer video tools. Polycom’s RealPresence CloudAXIS Suite, released today, lets existing customers add anyone on Skype, Facebook, and Google Talk to their video conferences from a browser via a simple hyperlink.

With a growing number of companies employing a mobile workforce, video conferencing services are touted as a huge market. However, this announcement comes at a time when the market has stalled. According to research firm IDC, video conferencing revenue worldwide fell 10 percent, in part due to the global economic crisis.

There is interest in video conferencing, but it’s not seen as a necessary IT spend — yet. Is this product rollout enough to spike interest and increase the market for these tools?

According to Polycom, this is the most significant business development in years, and will give the company a competitive edge over Cisco, the established market leader. Cisco holds 41.9 percent of the video-conferencing market for enterprise, according to IDC.

Universal video conferencing is a huge need, but Polycom faces a tough competitive landscape. Privately held companies like Vidyo and Avaya are snapping at its heels with their cost-competitive video software. And enterprises are holding on to legacy tools, so Polycom is struggling to compete with the likes of Cisco, Microsoft, and Citrix.

According to Reuters, the success of this new product is a “vital” for Polycom, which still generates most of its revenue from hardware-based systems but (similarly to computer-maker, Dell) is shifting to a software model.

Is this technology worth $12 billion? Voice your opinion in the comment section below.