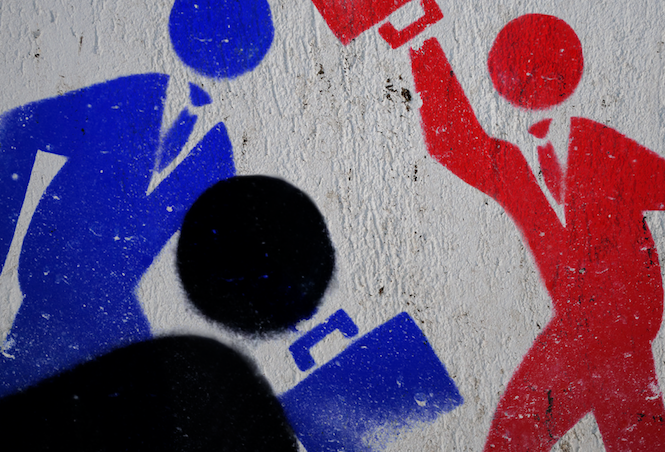 What if you could tell if someone was a Democrat or a Republican … without ever asking them about their politics? It turns out that you can.

“I think we’ve sequenced the DNA of Republicans and Democrats,” Jason Garoutte told me today. “Based on words on someone’s website, we’d have a very good chance of determining who is a Democrat or a Republican.”

Garoutte is the general manager and CMO of customer search engine Mintigo, which we’ve featured before. Recently, Mintigo turned its company-profiling technology on people. Specifically, on the 519 very special people who are currently running for public office in Congress.

And there are some very interesting findings.

For instance, Republicans are more than twice as likely to use words like “budget,” “taxes,” “cut,” “debt,” and “reduce.” And Democrats are two-and-a-half times more likely to say things like “education,” “Medicare,” “seniors,” and “veterans.”

In addition, Republicans appear to be obsessed with the president: “Obama” is used 50 percent more frequently on Republican congressional candidates’ websites than on Democrats’

Where do both sides fall down? Technology.

Less than half of politicians use Google Analytics, for instance, to monitor web traffic. That contrasts to at least 62 percent of top websites and as much as 82 percent of websites that use a recognizable traffic analysis tool. In addition, only three-quarters of politicians’ sites reference Facebook — which would seem to be table stakes in social today — and only nine percent link to the candidate’s LinkedIn profile.

Mintigo’s technology, Garoutte told me, is adept at finding and analyzing patterns of words on websites. Typically, the company uses that capability to help its clients find customers. In this case, however, it has come in handy to find out exactly what politicians are thinking about most … without the bother of asking them.

Which means you can apply the same principles when you meet and talk to people. Unless they start saying things like “I think we need to budget money for education, use taxes to fund Medicare, and help seniors cut their debt.”

Then all bets are off.