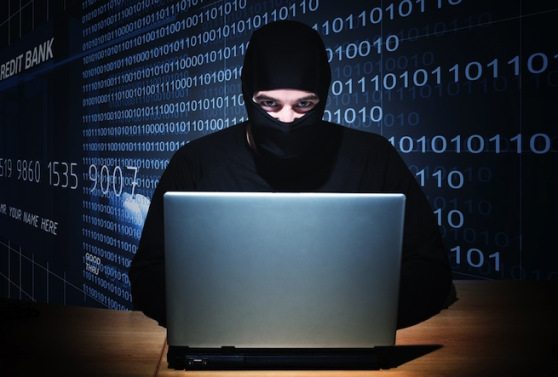 Dabble in online dating? It turns out that the crippling fear of an awkward first date is the least of your troubles. A fraud is sweeping online dating sites, according to a special report in this month’s issue of Glamour Magazine.

The scam typically works like this: A con artist, usually based in an Internet cafe overseas, will lift a photo from Facebook or another social networking site. They will painstakingly craft a fake profile and begin targeting people that are looking for love.

Once they’ve made contact, they will typically request to move the conversation to a private instant messaging service. He or she will begin the courtship process by sending letters and love poems for a period of weeks and finally offer to fly to meet their victim. Within hours of the expected arrival time, an emergency will strike: A work visa has expired, or their aunt/niece/child is sick and they need a few thousand dollars to be wired over so they can finally meet their intended. 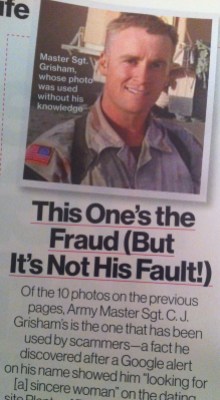 In many cases, scammers will choose to use pictures of military personnel. After discovering that his headshot consistently showed in hoax dating profiles (thanks to a Google alert), Army Master Sgt. C.J. Grisham set up a personal blog for soldiers to report their photo being used on online dating sites.

“Over the past few years, I’ve seen these scammers use all kinds of photos removed from open Facebook pages, blogs, official military websites, and command pages,” he wrote in a blog post last month. “I’ve also seen my own photos and name used.” (The image of Grisham that was used by scammers is pictured, left)

With a few of the largest player like OKCupid, Match, and others, there are precautionary measures in place. However, on smaller or niche dating sites like christiandatingforfree.com and datanta, there is no security system to spot a fraudster.

[Update: the site christiandatingforfree.com contacted us to notify us of the precautions they have in place, including a human editor who responds to complaints and reports, and ThreatMetrix, a cybercrime prevention software.]

“On some dating sites, as many as one out of 10 profiles is a scammer,,” Mark Brooks, editor of Online Personals Watch told Glamour.

The lesson here is that online dating startups will need to step up their game to keep consumers safe. “In the war against online dating scams and security threats, we’ve chosen to do whatever is necessary to always be a few steps ahead of scammers, and not the other way around – which is usually too late for our users,” said Cupid.com’s CEO, Bill Dobbie.

“This decision has its high price tag, but the alternative can be much costlier,” he continued. For this reason, Cupid.com, the online dating network behind Flirt.com and BlackMatch.com, announced a partnership this month with RecSys Ltd, an anti-scammer technology. The goal is to catch them 35 percent faster.

With the new system, any individual identified as a scammer is added to the master database, which other online dating companies can access. To identify rogue behavior, the algorithm factors in the user’s login location, IP address, profile photo, and behavior patterns. Additionally, the system can detect “bots,” often operated by organized crime gangs, which create profiles and engage real members in automated scripted conversations designed to elicit payment.

Already, through its quality assurance methods, the site has identified 20,000 scammers who get permanently blocked from Cupid’s communities each month.

Word of caution: The FBI recently issued a warning about a different kind of online dating scam known as “ransomware.” It’s a virus that will make your computer inoperable until you hand over a payment. Read more about the ransom scam here.

Have you ever been a victim of an online dating scam? To protect consumers, sites like romancescam.com are being set up for volunteers to post details of the counterfeit dating profiles they come across. Christine Davis, a design student who was duped by a fake profile, set up this particular site and wants to support others who have been targeted. Davis calls it the “Nigerian advance fee scam,” as it is thought that the majority of spammers are based in Western Africa.