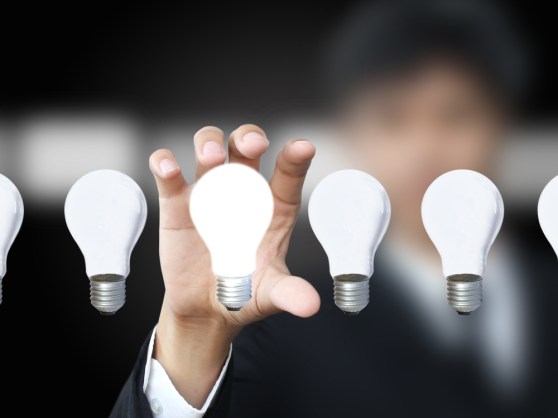 This post comes to us from startup guru Steve Blank.

Almost every large company understands it needs to build an organization that deals with the ever-increasing external forces of continuous disruption, the need for continuous innovation, globalization, and regulation.

But the problem is here is no standard strategy and structure for creating corporate innovation. In this post, we’ll outline this strategy problem and propose some specific organizational suggestions.

I’m sitting at the ranch with Alexander Osterwalder, Henry Chesbrough and Andre Marquis listening to them recount their lessons-learned consulting for some of the world’s largest corporations. I offered what I just learned from spending a day at the ranch with the R&D group of a $100 billion corporation along with the insights my Startup Owners Manual co-author Bob Dorf, who has several Fortune 100 clients.

(Full disclosure. I’m recovering from a reading spree of Chandlers Strategy and Structure, Gary Hamel’s The Future of Management and The Other Side of Innovation by Trimble and Govindarajan, Henry Chesbrough’s Open Innovation, as well as The Innovator’s DNA from Dyer, Gregersen and Christensen. So some or most of this post might be that I’ve overdosed on business books for the month.)

Collectively we’re beginning to see a pattern and we want to offer some concrete suggestions about Corporate Management and Innovation strategy and the structural (i.e. organizational) changes corporations need to make.

If we’re right, it will give 21st companies a way to deal with innovation – both sustaining and disruptive – as a normal course of business rather than by exception or crisis. Companies will be organized around Continuous Innovation.

Strategy and Structure in the 20st Century

While companies have existed for the last 400 years, their modern form is less than 150 years old. In the U.S. the growth of railroads, the telegraph, meat packers, and steel and industrial equipment forced companies to deal with the strategies of how to organize a complex organization. In turn, these new strategies drove the need for companies to be structured around functions (manufacturing, purchasing, sales, etc). 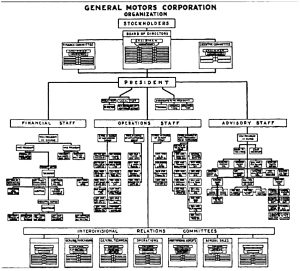 90 years ago companies faced new strategic pressures as physical distances in the United States limited the reach of day-to-day hands-on management. In addition, firms found themselves now managing diverse product lines. In response, another structural shift in corporate organization occurred. In the 1920’s companies restructured from monolithic functional organizations (sales, marketing, manufacturing, purchasing, etc.) and reorganized into operating divisions (by product, territory, brand, etc.) each with its own profit and loss responsibility. This strategy-to-structure shift from functional organizations to operating divisions was led by DuPont and popularized by General Motors and quickly followed by Standard Oil and Sears.

In each case, whether it was organizing by functions or organizing by operating divisions, the diagram we drew for management was an organization chart. Invented in 1854 by Daniel McCallum, superintendent of the New York and Erie railroad, the chart became the organizing tool for how to think about strategy and structure.

For one, ut allowed companies to visually show command and control hierarchies – who’s responsible, what they are responsible for and who they manage underneath them, and report to above them. (The irony is that while the chart may have been new for companies, the hierarchies it described paralleled military organization and had been around since the Roman Legion.)

While organizational charts provided the “who” of a business, companies were missing a way to visualize the “how” of a business. In the 1990’s Strategy Maps provided the “How.” Evolved from Balanced Scorecards by Kaplan and Norton, Strategy Maps are a visual representation of an organization’s strategy. Strategy Maps are a tool to translate the strategy into specific actions and objectives to measure the progress of how the strategy gets implemented (but offer no help on how to create new strategies.). 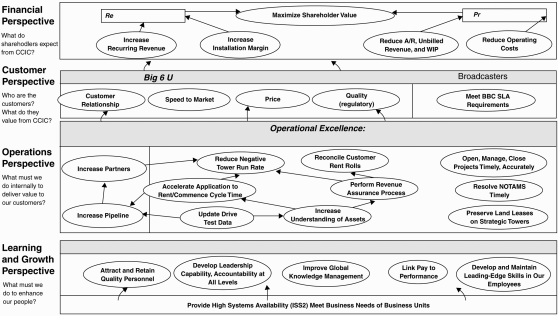 By the 21st century, organizations still lacked a tool to create and formulate new strategies. Enter the Business Model Canvas. The canvas describes the rationale for how an organization creates, delivers, and captures value (economic, social, or other forms of value). The canvas ties together the “who and how” and provides the “why”. External to the canvas are the environmental influences (industry forces, market forces, key trends and macro-economic forces). With the business model canvas in hand, we can now approach rethinking corporate innovation strategy and structure.

Management Innovation in the 20th Century

Inside existing companies and divisions, the business model canvas is used as a tool to implement and continuously improve existing business models incrementally. This might include new products, markets or acquisitions.

A New Strategy for Entrepreneurship in the 21st Century 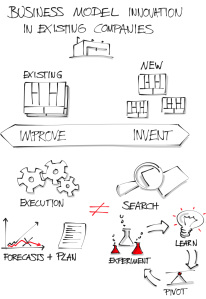 This is not unlike the challenges corporations were facing in the 1920′s, when companies found that their existing strategies and structures were inadequate to respond to a changing world. We believe that the solution for companies today is to realize that what they are facing is a strategy and structure problem, common to all companies.

The video below (from Strategyzer.com) emphasizes that companies will need to have an organization that can do two things at the same time: Execute and improve existing models and invent new and disruptive business models.

We propose that corporations equipped for the challenges of the 21st century think of innovation as a sliding scale between execution and search.