Ask.com and app discovery engine Quixey have signed a deal that will see explicit app search capabilities embedded within a major search engine for the first time.

No, it’s no Google, and not even a Yahoo, but Ask.com still gets three percent of U.S.-based query volume, and had almost 150 million unique visitors in October 2012, according to Compete.com.

Quixey indexes Android, iOS, Windows Phone, and BlackBerry apps not just by their title and description, but by everything that is said about them online. That makes Quixey’s results much more relevant, according to Quixey CEO Tomer Kagan.

“With apps we’ve taken a step forward in terms of functionality,” Kagan told me yesterday, “but a step back in terms of discoverability.”

Starting at 5PM today on Ask.com, app-related searches will automatically include apps in the primary search results. Alternatively, users who wish to restrict the search results to apps only, can simply click the Apps tab: 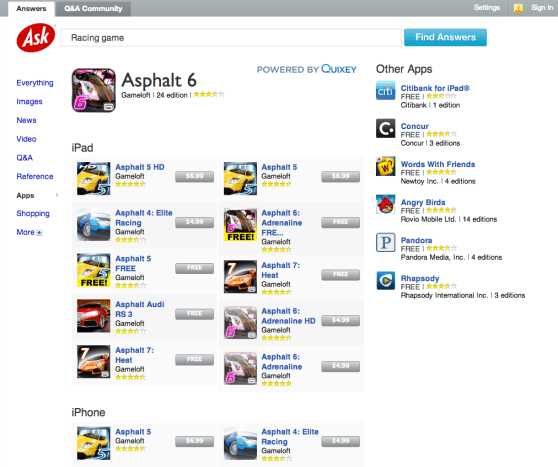 This is Quixey’s biggest integration to date, having previously integrated with companies such as Skyfire and Appthority.

The company is a B to B to C play, meaning that it does not provide services directly to consumers, but simply works through other consumer-facing companies. In fact, while Quixey has a website that demonstrates app search, there is not a single employee in the company whose responsibility it is to maintain that page, Kagan said.

The integration means that searching for apps will be a whole lot easier — and better, Kagan says.

“Often an app is a better result than a web page,” Kagan told me. “For example, if I want to find the best hikes in my area.”

From Ask.com’s perspective, adding app search rounds out its results, and opens new doors. For example, queries such as “watch Toy Story” will now include links to Netflix and Hulu, where users can actually watch the entire movie.

“Apps are gateways to some of the most top-notch digital content out there, so this integration fits perfectly with where our product is headed, especially when it comes to mobile devices,” Ask COO  Shane McGilloway said in a statement. 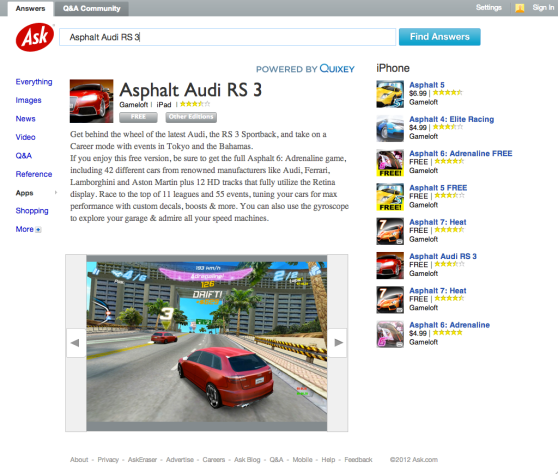