If you’ve always wanted to control your computer with Tom Cruise-like Minority Report gestures, that day is one step closer. And the technology is 200 times more sensitive to motion than Xbox 360’s Kinect.

The only thing needed now? Software that understands gestures.

Which is precisely why over the next two weeks, Leap Motion will send 10,000 Leap units to new developers to help them build software applications and games which take advantage of the new gesture-based input capabilities … and why the company has attracted over 40,000 developers so far.

It’s about the size of a pack of gum, or small iPod. Sitting right in front of your Mac or PC, the device senses your hand motions and allows you to control your computer with hand gestures in the air. Those motions will allow you to zoom in on pictures, rotate on-screen 3-D objects, draw, write, create 3-D computer-aided designs, and much more.

The device costs about $70 at pre-order prices, and will be delivered to consumers in early 2013. But before the hardware is delivered, Leap Motion wants a rich software ecosystem. 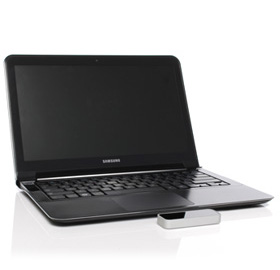 So the company is also releasing an updated software development kit (SDK) today, with new features that will help developers build gesture-aware apps much faster than before. The new SDK offers pre-fabricated building blocks: a library of defined interaction APIs. Which means that instead of trying to comprehend how a user’s hand moved, developers will now have access to a library of sensed motions: a twist, a push, a sweep. The Leap software will report a defined and pre-identified motion, and developers will now simply need to map that gesture to actions in their applications.

“Our top priority is making sure that when the Leap Motion controller ships to consumers, it is supported by a wide array of quality apps,” Leap Motion co-founder and CEO Michael Buckwald said in a statement.

Finally, the company announced that Leap will ship with an app store, so users can pick up more software that understands what they are doing with their hands, and so developers can monetize their creations.

Leap Motion has raised $14.55 million from various investors to take the Leap and its gesture language to the world.