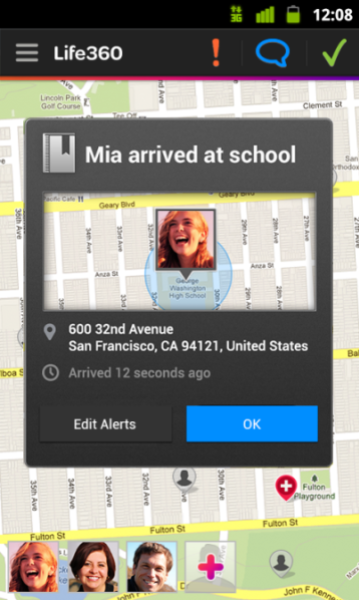 Life360, an app that helps families keep track of one another’s locations, will have 25 million registered users by the end of the year.

That puts it within striking range of another location-centric app company with a much higher profile, Foursquare, which hit 25 million users in September, 2012.

Both companies started in 2008, but Life360 has only raised $6.85 million to date, whereas Foursquare has raised over $71 million.

Life360 chief executive Chris Hulls told VentureBeat that his company will surpass Foursquare in audience size within the next couple of months, stating that Life360 has a much faster growth rate — though he didn’t specify exactly what that rate is. He also declined to say how many of those 25 million users are regularly active on the service, though he said that it was a “pretty high ratio.”

“We’ve really hit an inflection point in the company in terms of the family network going digital. We want to be the company that really owns your family life on the phone,” Hulls said in a phone conversation.

The company announced its user milestone in a press release this morning; unveiled a new, rainbow-colored branding on its website; and also announced two new features that should help the worried minds of modern parents:

The Places feature seems potentially reassuring, especially for parents who are worried about the locations of wayward teens (did he really arrive at school this morning?) and are fairly sure that their progeny won’t be clever enough to ask a friend to take their phone to school for them while they go on a holiday to Great America.

Hulls also said that Life360’s geofencing feature, unlike other companies’, wouldn’t drain your phone’s battery rapidly. Referring to other family-location services and Geoloqi, Hulls said, “None of them have really worked without killing your battery.” (Geographic data giant ESRI bought Geoloqi in October, 2012.)

But Life360’s crime data seems like it could encourage even more paranoia and obsessiveness about one’s neighborhood. Do we really need to worry about every car window smash-and-grab? Maybe, maybe not, depending on your neighborhood and your attitude toward situational awareness. Fortunately, like other Life360 features, you can turn this one off if it freaks you out.

The company says its customers have shared 150 billion points of location data since the company’s start in 2008, and that it currently helps families share more than 2,500 location data points every second. (To continue the comparisons, Foursquare has collected more than 3 billion check-ins since day one.)

The app is free, but Life360 charges $5 per month if you want to use it to locate family members who use phones other than Android or iPhone smartphones. Currently only a tiny minority of customers pay, Hulls said.

However, he’s got a plan to make money. In the coming year, Hulls said Life360 would expand its features to include more than simply emergency-oriented features. That will include communications and utility features, such as an “Onstar for your phone” feature that can help you find your kid if she gets lost, or call a tow truck for you if you get a flat tire.

Some of these features will be paid, premium features, giving Life360 its first serious monetization options, Hulls said.

Life360 is based in San Francisco and employs about 25 people.

Update 8am Pacific: Life360 will have 25 million users by the end of the year, not right now, as this story originally stated. Sorry for the mistake!