Twist promised to be the perfect app for the perpetually late when it hit the iPhone in July — instead of shooting an “OMW” (on my way) text, the app lets you automatically ping friends with updates on your location. It may not prevent you from being late, but at least your friends know how far away you are.

Today the company is bringing Twist to Android, as it aims to double-down on solving the “when” dilemma (as in, when the heck are you getting here) for mobile services. 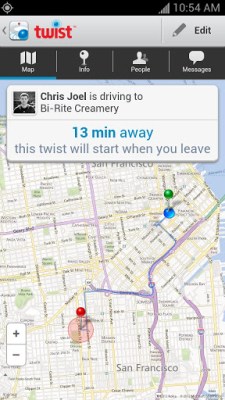 I think that the next generation of web applications and apps will all have a time component,” said Bill Lee, chief executive of Twist and noted serial investor. For the most part, the current trends in apps have focused mostly on social and location aspects, but haven’t dealt much with time.

Lee, an early investor in companies like Yammer, Hootsuite, and Tweetdeck, leveraged his own frustrations with meetings to create Twist. With his experience dealing with hot young companies, he was eager to get ahead of a potential trend. Twist competes with the location tracking company Glympse, as well as some recent features added to Waze, but Lee is quick to point out that he thinks Twist offers a far simpler experience.

Twist’s Android app works just like its iPhone sibling: Simply create a Twist from within the app by choosing where you’re going and who you’re meeting. When you leave your starting point, the app sends your location progress to your contact, and it also includes information about potential traffic snarls. Best of all, Twist works even if the recipient doesn’t have the app — you can also send a text or e-mail to a Twist web app.

Instead of building a native app, Twist decided to rely on HTML5 for Android, co-founder Mike Belshe noted. “HTML5 is not where it needs to be today, but we do want to put our bets and chips behind that,” he said.

Twist’s  iPhone app is currently native, but Belshe, who also invented the SPDY protocol while part of the Google Chrome team, is looking forward to the day when he can power it with HTML5 as well. At that point, the company will easily be able to develop and update Twist more easily (which is the typical mantra of HTML5 fans).

The company has also developed some patent-pending methods to reduce battery consumption while using its apps, Bershe said. That’s important, because the Twist app needs to run in the background as you travel to your next meeting.