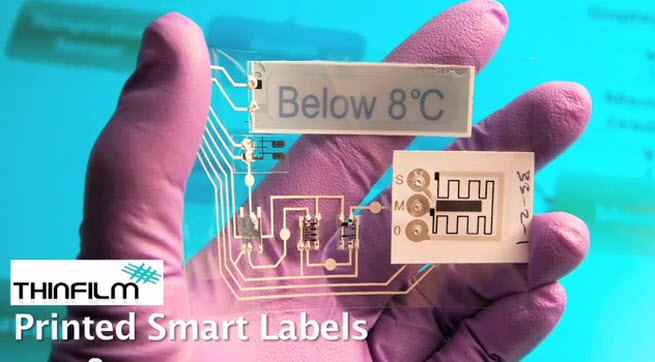 Thin Film Electronics is an interesting company in Oslo, Norway, that has figured out how to print electronics on small labels. And now the company, also known as Thinfilm, has demonstrated a prototype that combines the full system for a disposable printed electronic tag — a modern sensor system that could replace product bar codes — for a fraction of the cost of other competing products.

To date, vendors have cobbled together electronic tags from a variety of components. But Thin Film Electronics has pulled the components into an integrated system that can be printed onto flat stickers or plastic films. And it can add rewritable memory and sensors to the system. Within a matter of a few years, these smart tags could be used to get rid of the aging laser-scanned bar code and enable what tech visionaries like to call the “internet of things,” where everyday objects can access the internet and produce a huge volume of sensor data.

The technology is based on “flexible electronics,” which is the subject of a broad alliance of technology companies in the Flex Tech Alliance. Davor Sutija, chief executive of Thinfilm, said in an interview with VentureBeat that one application would combine a tracking tag with a temperature sensor. So the device would be able to confirm whether a shipped package with perishable goods remained within a critical temperature threshold throughout its journey.

“We make this thin-film smart tag for a few dimes, or ten times cheaper than silicon,” Sutija said.

The system for a printed electronic label can be made with technology that resembles the inkjet printers that spray ink onto paper. But in this case, the manufacturer sprays electronic circuitry onto surfaces such as thin films. The system includes printed memory, sensors, and a processor. It will be a few years before the system is in mass production, but it’s a good start.

The labels could enable item-level tracking for goods such as pharmaceuticals and perishable foods. They could also be manufactured for about a tenth of the cost of the competing solution, which in this case would be an active radio-frequency identification system (RFID).

Thin Film Electronic has taken three printed components — memory, logic, and a temperature sensor — and gotten them to work together. The device senses temperature and writes the results to memory. The data can then be output to a display. This system would previously have to be made out of different components that use different materials.

“The promise of printed electronics rests on its ability to catalyze the coming technology wave often referred to as the internet of things,” Sutija said. “Making electronics ubiquitous requires not only cheap components but also ways of integrating them. The ability to store, process, and communicate local information makes ordinary objects aware of their environment. These smart objects become our agents, gathering actionable data, and displaying it when we need to get involved.”

“This demonstration is a key step towards Intelligent Packaging, and contributes directly to the Bemis Intelligent Packaging Platform that we are creating with Thin Film,” said Don Nimis, president of Shield Pack, a division of Bemis Company, a major player in food and medical products packaging. “Intelligent packaging will help Bemis customers monitor the quality of their products individually and consistently.”

Thin Film Electronics wants to add a timer and wireless communication to the system. It hopes the system will be commercially available by the end of 2014. Temperature sensors alone are part of a market that generates $1.5 billion in revenues a year, Sutija said.

“That is a killer app on the road to the internet of things,” he said.

Thin-film electronics will compete with RFID, but the cheapest RFID tags are passive. They can be read, but not be written upon. Active RFID tags that have rewritable memory are more expensive.

Thin Film Electronics is listed on the Oslo Stock Exchange. It is a pre-revenue company that traces its origins back many years to an alliance with Intel. But it started in its current form in 2008. Portions of its work were funded by Innovation Norway and Flex Tech Alliance. Thin Film Electronics has 30 employees.