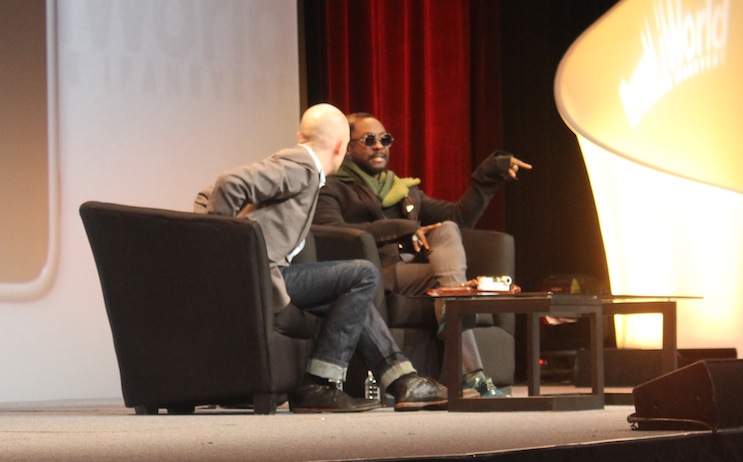 Will.I.Am wants kids to stop dreaming of being a rapper and start dreaming of being a technologist. The Black Eyed Peas musician spoke today at Macworld 2013 about a variety of projects he’s doing with “Intel Futurist” Brian David Johnson and about his desire to get kids interesting in “disruption” and creating jobs in less-privileged areas.

He talked about his neighborhood growing up.

He then showed off his newest product, called the i.am+ foto.sosho, a piece of hardware that slips over your iPhone and allows you to take pictures, edit them, and send them to the Internet without connecting to a computer. He described the process of getting the i.ams in retail stores by the holidays — it was really easy. Likely because of his celebrity (and maybe because it’s a cool looking product) he’s got major retailers carrying the product, and big window displays.

Looking back, he said, “This picture is telling me that I need to go back to the factories and create jobs in the projects.”

It’s this kind of mindset he wants children growing up in his neighborhood and across the world to take on: using tech to “disrupt the conversation” and then bring it home. He said tech disruption can actually be rude. It’s like interrupting a conversation at a party, he said, but you need to make that old conversation and “render it obsolete.” Make people laugh, change the subject.

He used Instagram as an example, saying they rendered Kodak obsolete. These are the new role models children need.