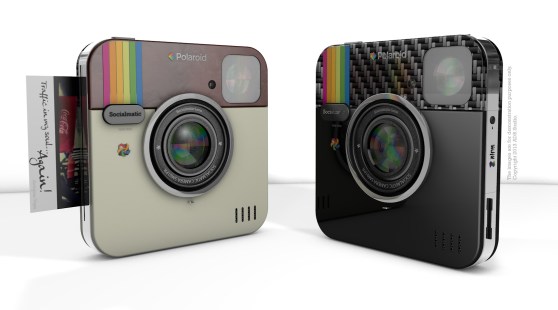 A company called Socialmatic recently announced that it has signed a memorandum of understanding with the company that licenses the Polaroid trademark to create a digital version of the Polaroid camera that looks suspiciously exactly like the Instagram app icon.

The company says, somewhat optimistically given that it has nothing beyond a very sexy rendering, that it hopes to begin production in 2014. Between then and now it will need to proceed beyond the MoU to an actual contract, come up with some specs, design the product’s electronics, find a manufacturer, figure out a way to sell it, get deals with retailers of some kind, somehow get it into customers’ hands, and pray that it actually works. Oh yes, and it will probably also need to strike some sort of licensing agreement with Facebook, given how similar its concept is to the Instagram icon (right).

Update March 5: An Instagram representative contacted me after reading this article with the following statement: “This is not an Instagram camera and we have no affiliation with Socialmatic.” So my guess is that you can probably forget about actually seeing this camera in 2014.