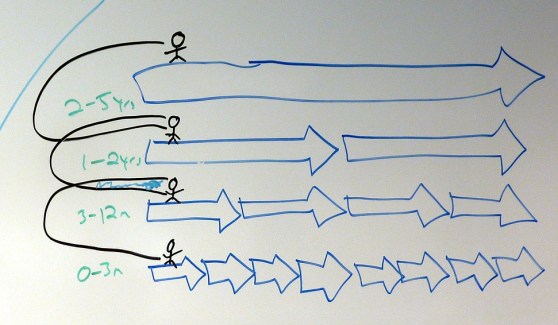 Once a year at Sigma we bring together our portfolio CEOs to discuss current trends in technology, business models, Silicon Valley, and the markets and to share war-stories. After each event we hear from the participants how valuable it was for them to learn from their peers.

The life of a startup is about maximizing the number of good decisions and minimizing the number of bad ones. If you can learn what worked and what didn’t from someone else who has recently traveled the same road as you, you can save critical time and increase your venture’s chance of success.

At our most recent conclave one of the main topics covered was the strategies companies use to successfully grow while maintaining a culture of innovation. What emerged from the discussion was a clear understanding of two key characteristics of successful “innovation cultures.” The job of innovation belongs to everyone in the company and it requires taking risks.

First, innovation is everyone’s job! To paraphrase Ratatouille food critic Anton Ego, not everyone can be a great innovator, but great innovations can come from anywhere. One classic mistake larger companies fall victim to is creating “innovation teams.” This is a great way to demoralize everyone not on the team.

Another big mistake, often made by technology companies, is that innovation is an engineering problem. When I think about the successes in Silicon Valley, many of the most enduring were business model innovations – think AdWords from Google or SaaS as a way to deliver and sell enterprise software. Yes, there were technologies involved in those successes, but I would argue that the disruption they caused and their durability has as much to do with the business model innovation as with any particular technology innovation.

Second, innovation involves risk. It reminds me of the disclaimer at the end of almost every commercial for a financial or investment service: “Investment involves risk including the risk of loss…” The same is most certainly true of innovation. Don’t innovate and you are sure to die, but as you innovate you will make mistakes. As Brad Garlinghouse, CEO of YouSendIt so eloquently put it, “Innovation is the result of a culture that encourages risk and is tolerant of failure.”

The companies that are the most successful at maintaining cultures of innovation understand that sometimes – nay, many times – innovations fail. Those companies accept the risk of that failure and have a culture that allows for failures and encourages risk taking.

MOGL has three top goals that are well beaten into everyone at the company on a regular basis: more users, more restaurants, and more kiosks. Once a month the company holds a “Growth Hacker” meeting that is open to any employee that wants to participate. At the meeting anyone who has an idea for an initiative to drive one of the key goals gets to present his or her idea. They must present in PowerPoint: hypothesis, execution plan, and dollars needed. Everyone in the meeting votes via smartphone and the winner gets the dollars they need. They report back results at the next monthly meeting.

At one meeting a product recommendation based on feedback a sales rep had received from a restaurant was pitched, won, and then tested. That product, known as “2 cents”, allows a MOGL member to send private feedback to a restaurant owner after the member makes a purchase at the restaurant. It’s now the most liked feature of the entire MOGL product suite for restaurants.

The number of ideas/products from these meetings that fail is around 80 percent, but many times those failures eventually lead to a breakthrough. The key is to continue to “pivot” the idea until it sticks and keep the innovative ideas coming.

What I see in YouSendIt and MOGL is that innovation comes from everyone and in every area of the business.  For that to happen the culture must encourage taking risks.

Greg joined Sigma in 2000 after 20 years in the tech industry, where he was the founder of three successful companies: Connectify, GiftONE, and Vicarious. Early in his career, Greg was in product marketing at Apple.