Over half of doctors in the U.S. have now ditched paper-based systems in favor of electronic health records (EHRs), according to data released by the U.S. Department of Health and Human Services.

The market for EHRs is now estimated at between $6 billion and $10 billion. For this reason, noted investor Peter Thiel recently referred to this technology as revolutionizing “our interactions with the medical community, just as Facebook did for social networking.”

In the wake of this milestone, let’s take a deeper look at the market forces that triggered this shift, the remaining challenges, and the benefits for patients.

What triggered this shift?

Farzad Mostashari, the national coordinator for health information technology, insisted in a recent conversation at VentureBeat’s recent HealthBeat conference that the market must drive innovation “and not the government.”

But the “push and pull” effect for EHRs came from D.C. In 2009, congress passed the Health Information Technology for Economic and Clinical Health Act. This offered health care providers reluctant to make the shift to digital systems “meaningful use” incentives — and if that didn’t work, a threat of punitive action.

Without doubt, the effort has spurred adoption. New data shows that more than 50 percent of doctors and 80 percent of hospitals have received enhanced federal funding for achieving “meaningful use” of digital records.

The Obama administration’s support for EHRs triggered the attention of entrepreneurs and venture capitalists. In 2009, the most prominent venture firms began pouring funding into web-based electronic health records, such as Practice Fusion and CareCloud.

How do physicians feel about EHRs?

If you want to spark a heated debate at any health conference, just ask the panel for their opinion on the various EHR providers. Some of the most frustrating challenges include interoperability between different systems and a lack of integration with medical devices.

It’ll take a few years before we really start to see the benefits of mass EHR adoption.

A recent study in the Journal of the American Medical Informatics Association found that entrenched behavior is a bigger factor than we realize. Doctors aren’t Luddites, but many have learned to “absorb” uncertainty rather than trying to minimize it through technology.

Just like any technology trend — we have the early adopters on board, but it’s not easy to change behavior. 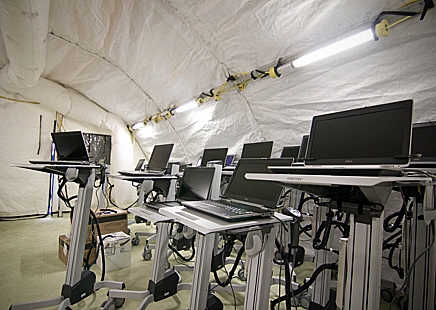 Above: EHRs stored at a mobile field hospital that substituted for the medical center damaged by a tornado in Joplin, Mo.

How will EHR adoption affect you?

As the New York Times‘ columnist Thomas Friedman pointed out, with information about your tests, results, procedures and gaps in care stuffed into manila folders in doctors’ offices and hospitals, and not turned into electronic records, it has proven difficult to improve patient outcomes.

Criticism of electronic record vendors is rife — and it’s easy to miss those stories of hospitals streamlining processes and collecting data to benefit patients. Here are some of my favorite examples:

Is your data safe?

Above: Todd Park, the CTO of the United States, believes we need to set health data free.

What happens if a doctor loses a server connection or is exposed to a computer virus while inputting notes into your electronic record? Or worse, can vendors sell your data to health insurance providers?

It’s not clear whether EHRs are any less safe than the paper-based systems they replace.

Vendors frequently claim that your data is safe as it will be stripped of any personally identifiable factors. They also make the case that sharing de-identified data among health organizations will benefit patients in the long-term, and prove beneficial for medical research.

Practice Fusion’s chief executive Ryan Howard believes that sweeping EHR adoption will ultimately improve access to data about patients. In a recent interview, Howard responded to a question about potential privacy concerns by listing the positive outcomes from mining data about doctors and patients.

“We can recommend drug therapies based on their popularity [with previous patients],” he said, and he claims that the U.S. has 200,000 avoidable deaths a year because “data is simply not shared.”

When it comes to electronic records and the cloud, health care is treading carefully — and rightfully so. “Getting into the cloud is not an all-or-nothing game,” said Dr. Joshua Newman, who is also the director of product and health strategy at Salesforce. Providers should take “baby steps,” he explained on stage at HealthBeat.

Will health care be cheaper in the long-term?

As VentureBeat executive editor Dylan Tweney pointed out in his most recent column, due to the lack of transparency over prices, the U.S. health care market has little correlation between price and quality. Can EHRs help?

Proponents say that electronic health records will drastically lower administration costs in the long-term. RAND Corporation, a global policy think tank, estimates savings of about $80 billion a year for the health care sector when it moves toward paperless medical records.

However, costs to “start up” an EMR system can’t be ignored, and it may have made it even easier to bill patients. Little evidence exists at this point to suggest that it will meaningful lower costs for patients — even RAND admitted that the results of its study may have been overstated.

One advantage might be that a database of information is more readily available about a patient — allergies, underlying conditions, and so on. This could theoretically save patients money by reducing excess (or worse, potentially harmful) treatment.

Technology “is only a tool,” said Dr. David Blumenthal, who helped oversee the federal push for the adoption of electronic records under Obama, in an interview with the New York Times. “Like any tool, it can be used well or poorly.” If utilized correctly, Blumenthal believes that EHRs can improve efficiency and drive higher-quality patient care.

What are your thoughts on electronic health records? Are they an improvement on paper-based systems? Leave an opinion in the comment box below.