In the three months since Google announced it was shutting down Reader, news aggregator Feedly has tripled its userbase from four million to 12 million. In other words, Google killing its RSS platform has been a truly wonderful thing for Feedly.

But only because the company was ready for hyper-growth.

But a new plugin-free web version, and a new cloud-based API for third-party developers and applications, could be the key to making Feedly the new default RSS partner for applications such as news readers and social magazines.

The new Feedly is now processing over 25 million feeds a day, the company announced today, and billions of articles. It’s built on a cloud architecture that delivers services to the web, mobile apps, and a platform that includes developer partners IFTTT (If this then that), Sprout Social, gReader, Press, and Newsify.

Over 200 developers have signed up to get access to the Feedly API, the company says, and it anticipates announcing more “innovative reading experiences” soon. 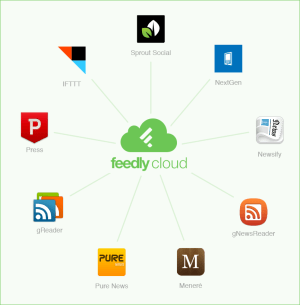 On a personal note, I used Feedly’s migration process — if you can call a couple of clicks a process — a couple of months ago, and I’ve been using Feedly ever since. (I put it first on my list of Google Reader alternatives for a reason.)

The migration was simple and complete, included my folder organization as well as my feeds, and the web experience of Feedly can be easily configured to closely match a slightly-better-designed Google Reader: text-heavy, compact, and easy to scan quickly.

Google is shutting down Reader on July 1.

If you have RSS feeds still active there, Google recommends that you export them before that date, or risk losing your data.